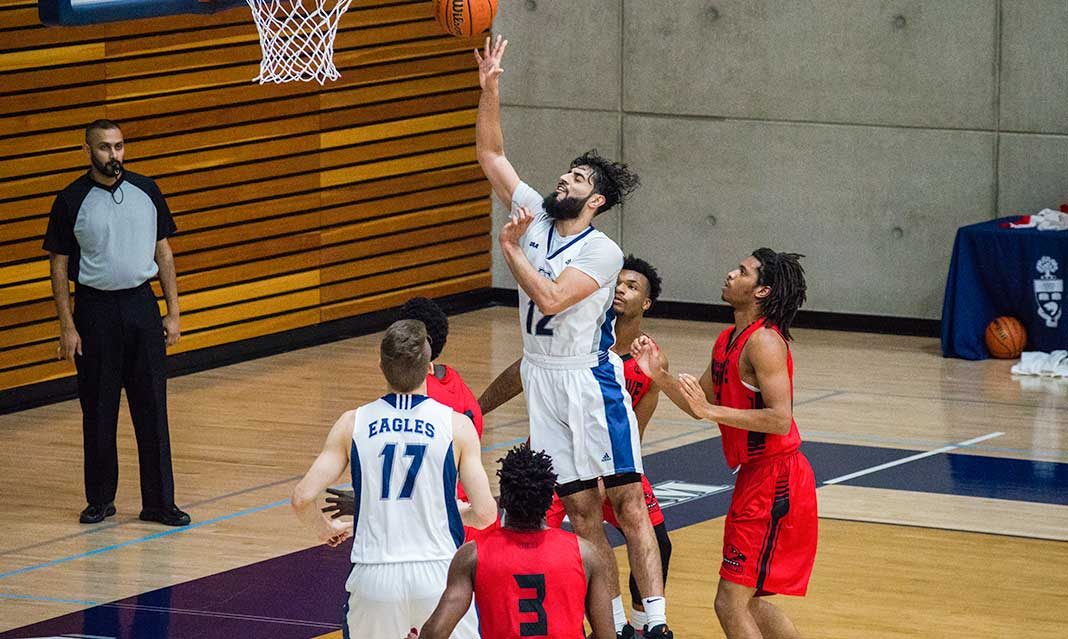 The UTM men’s basketball team had their fifth game of the season last Saturday, November 11 against the Fanshawe Falcons. There was an astounding total of thirty fouls resulting in free throw shots throughout the game.

UTM lost the toss to begin the game so Fanshawe was first to gain possession. However, it was UTM’s Nicholas Al-Rehany who was first to score a 3-point basket about one minute into the game. Fanshawe’s Chris Parker was quick to put his team on the scoreboard less than 30 seconds later, scoring a 2-point basket. The first foul of the game was given to UTM, where Fanshawe was given two free throws. Parker lined up at the free throw line and sunk in both baskets, allowing his team to take the lead for the first time in the game. Despite the baskets, Fanshawe proceeded to sink since UTM was playing well and working together as a team. Many of their passes were connecting but they couldn’t seem to find the basket.

UTM’s Nicholas Kwantwi blocked a Fanshawe player from scoring about four minutes into the quarter. Unfortunately, he got called for a foul. Fanshawe was given two more free throws where they sunk both in. Halfway through the first quarter, UTM got their first free throw, out of many, of the game. Zamam Khan confidently stepped up to the line and got both baskets in. About 15 seconds later, UTM’s Al-Rehany got his second 3-pointer of the game. The second half of the first quarter had a lot of back and forth play, with Fanshawe scoring a 3-pointer a minute after Al-Rehany’s. UTM was quick to follow this and sink another 3-pointer. With three minutes left to play, Fanshawe’s, Sean Clendinning, was given two free throw shots but missed the first one, only giving his team one point. With two-and-a-half minutes left of play, a scramble in front of the UTM basket led Fanshawe to gain two points. UTM’s Al-Rehany made a great play, which lead to him scoring, yet again, another 3-pointer. The first quarter ended 19-25 for Fanshawe.

With Fanshawe only leading by six, UTM came out hungry for the lead. An entire minute-and-a-half went by with neither team scoring a single basket. Unfortunately, it was Fanshawe who broke the no scoring quarter with a 2-pointer, which was then followed by a 3-pointer. UTM was now down by 11 points, only two minutes into the second quarter.

Fanshawe turned up the intensity and was really pressing in the UTM half, but,luckily for UTM, they could not seem to find the basket.

UTM player, Jonathan Kasongo, scored a 2-pointer for UTM about halfway through the quarter—putting UTM back in the game. However, this was closely followed by a Fanshawe 3-pointer. With two and a half minutes left in the half, Al-Rehany buries another 3-point shot. The half ended 28-38, with UTM trailing by ten.

During the halftime break, UTM Athletics ran a competition to give UTM students a chance to win one thousand dollars. Those students who had their t-card with them, received a raffle ticket at the start of the game. The draw was done at half where one students raffle number was chosen for a chance to win the prize. The competition was simple—the chosen student had to sink a lay-up, free throw, and 3-point shot. They were given two chances for each shot. The student chosen sank the lay-up and free throw shot with ease on the first try but, unfortunately, did not make the 3-point shot. No prize was given which means it is still up for grabs in the games to follow.

Fanshawe won the toss at the start of the second half, but it was UTM who got the first basket about twenty seconds in. Khan sunk a basket as he got fouled so not only did he get 2 points, he also got a free throw shot opportunity—which he scored. Within the first two minutes of play, both teams were scoring baskets. Kwantwi made an amazing block, followed by a steal. He was fouled immediately after where he received two shots at the free throw line—he missed the first one but sank the second shot. UTM began falling behind with Fanshawe continuously scoring baskets. With one-minute left in the quarter, UTM began ramping it up. The last two minutes were filled with aggression and high intensity from both ends. Kwantwi received two shots due to a foul on him, where he scored one basket. Fanshawe received two fouls for them that resulted in two of their players being awarded two shots each. Both Fanshawe players sunk their baskets, ending the quarter 50-69 for Fanshawe.

In the fourth quarter, Fanshawe came out very strong and ready to win the game. About forty seconds into the game, Khan was fouled and given two shots. He, unfortunately, missed the first one but sunk the second. Three minutes into the final quarter, UTM was still trailing by nineteen with the score sitting at 56-75. Roughly halfway through the fourth quarter, UTM’s Kyle Boorman, took the ball from the UTM end all the way to the Fanshawe end where he scored a lay-up. Fanshawe’s Clendinning, scored a 3-pointer to follow this. Al-Rehany, of course, was there to immediately match Clendinning’s 3-pointer by scoring his own. The men trailed by eighteen with less than two minutes to go. Khan and Boorman were both fouled where they got a collective two points between both of their free throw shots. UTM lost the game 73-93.