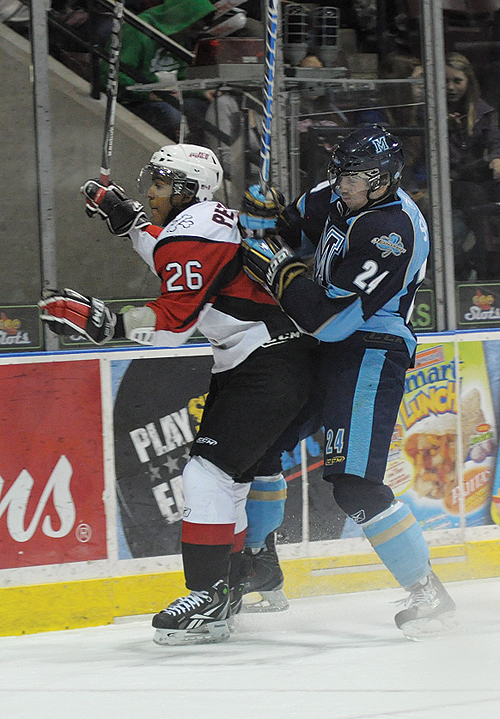 Fans here to celebrate Fan Appreciation Day filled the seats of the Hersey Centre for the Mississauga St. Mike’s Majors final regular season game Sunday afternoon. Despite their mediocre play of late, the Majors did not disappoint and awarded their fans with a hard fought 2-1 victory.

The first period saw sloppy play from both teams, with the game stuck at a scoreless draw. Both teams made fanned passes and took lazy penalties early in the frame. Icedogs defensemen Simon Gronvaldt had trouble keeping his balance and had several uncontested falls throughout the period, much to the amusement of several Majors fans at the Hershey Centre.

The highlight of the period came when Majors captain and UTM student Cameron Gaunce smashed an Icedog victim hard into the boards, almost knocking the plexyglass off its hinges. The crowd erupted into a frenzy and provided the game with its first boost of energy.

Despite the lacklustre play, there were a few close scoring chances in the period. The first chance came midway through the first on a Major’s powerplay. During a two on one break, Majors left winger Riley Brace elected not to pass the puck and riffled a wrist shot that faintly missed the top corner of the net by a few inches. The Icedogs had a chance of their own off a breakaway that resulted from a questionable giveaway by

The second period differed greatly from the first and was characterized by rough and chippy play. This was evident when Majors Dustin Ekelman and Icedogs Freddie Hamilton let their tempers get the best of them and nearly got into a fight around the face-off circle before the puck was even dropped for the second period. The shove fest was eventually contained by the referees, and play resumed.

The period was also full of offense, with all three of the games goals were scored during the 20-minute span. The visiting Icedogs got on the board first when a nice passing play in front of the net resulted in an easy tap-in goal for Matt Petgrave, scoring his sixth of the season.

Less than three minutes later, Majors defensemen Blake Parlett answered back with a hard earned powerplay goal off a big rebound. Icedog’s goaltender Mark Visentin was unable to handle the immense pressure and the goal led to a sudden change in momentum for the home team.

Late in the second, the Majors were able to take the 2-1 lead off a Jordan Mayer slapshot. Notching his 31st goal of the season, Mayer currently leads the Majors with goals scored, two more than Devante Smith-Pelly, who has tallied 29 of his own.

The late period goal turned out to be the dagger for the visiting team, especially since the Majors have only lost two games (none in regulation) this season when leading after
two periods.

The Icedogs were unable to capitalize on the two powerplay opportunities they had in the third period and ended up losing by a slim 2-1 margin. The loss caps off a disappointing week for the Icedogs, who lost both of their scheduled matches to the Majors, including a 2-1 shootout loss on Thursday.

The Majors ended their season with an impressive 42-20-4-2 record, setting a record in franchise wins. They are in sole possession of third place in the Eastern Conference and are set to face the sixth seeded Peterborough Petes in the first round of the playoffs.
The Majors first playoff game will be at the Hershey Centre on Friday March 19 at 7:30 p.m. Tickets can be purchased by contacting the Majors office at 905-502-7788 ext.1. Fans can also purchase tickets on ticketmaster.ca or from the Hershey Centre Box Office.