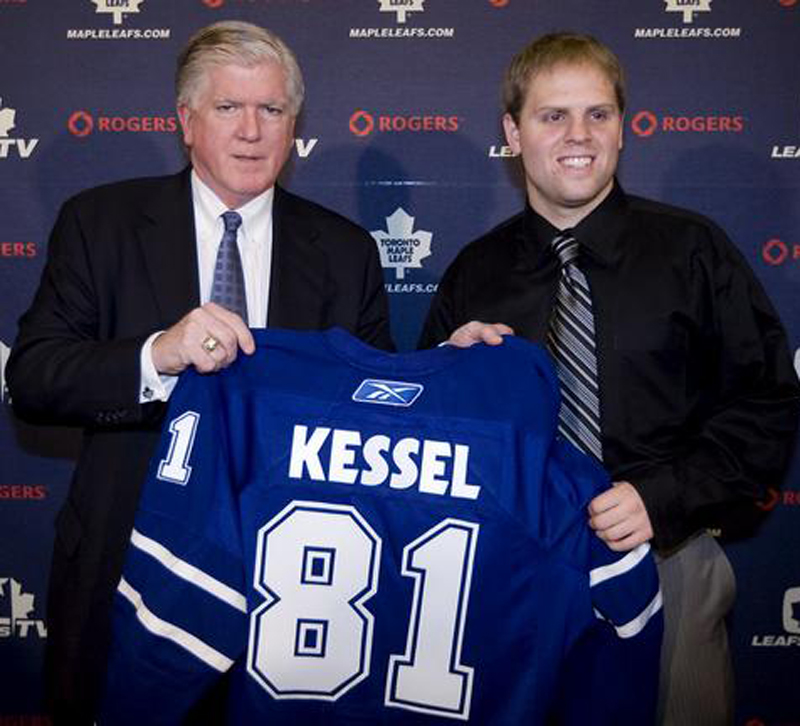 Last Sunday, Phil Kessel and Ron Wilson took shots at each other in separate media interviews. Kessel complained of a lack of communication with Wilson while Wilson remarked that Kessel dislikes any critique of his game when his shots aren’t ending up in the back of the net.

Brian Burke had separate meetings with both Kessel and Wilson the next morning and told them to sort it out on their own.

Kessel, a Leafs forward, clarified his comments against Wilson on Monday. The 23-year-old said that when he said that it might not be working out here, the “here” referred to his line rather than the Leafs or Toronto. He confirmed that he still loves the Leafs and he loves Toronto and its fans, adding that he wants to stay on the Leafs for a very long time.

He also adjusted his Sunday statement on his relationship with Wilson, stating that they don’t speak “often”—as opposed to not at all—but that there aren’t actually any problems between the two.

Brian Burke traded first- and second-round NHL picks in 2010, and a first-rounder in the June 2011 entry draft, to acquire Kessel from Boston two years ago. The deal has yet to prove advantageous for the Leafs, as the pick turned into Tyler Seguin, who is having a good rookie season in Boston. He currently has 17 points compared to Kessel’s 34. However, Seguin’s salary is $875,000 compared to Kessel’s $5.4 million. Burke still says he would make the deal today if he had to do it again, but that could be just words to the media. Burke stands behind his acquisition, but Kessel has to step up his game if he and Burke want to get out of the media spotlight due to the trade.

The Leafs are still in the hunt for a playoff spot in the East, but a costly loss to Montréal on Saturday stalled their hopes slightly. Currently, the Leafs are in 12th place in the East, just eight points back of Carolina, who hold the eighth and final playoff spot.  The recent acquistion of Joffrey Lupul should help the Buds offensively and take some pressure off Kessel.  Hopefully, Kessel and Wilson can stop the feuding and just focus on the playoff race.