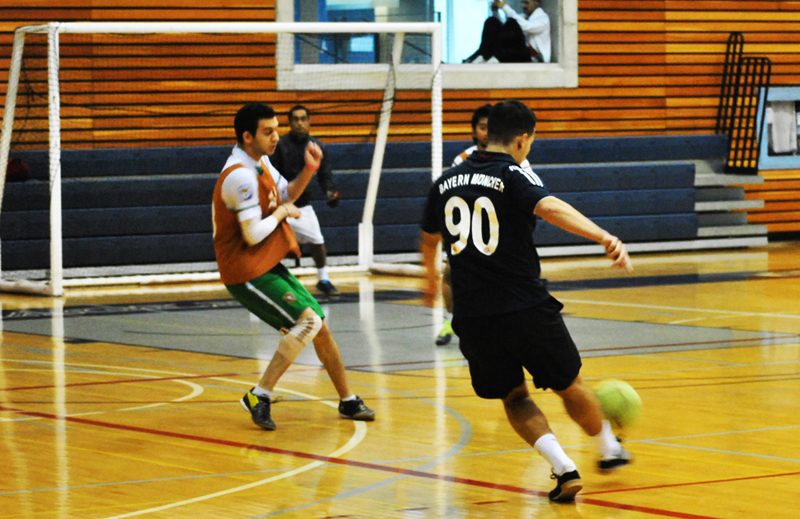 Jad Karami of the team Kollo Zalal shows his versatility and precision by netting four goals. However, his efforts are the only points his unit gets in their championship match against two-time defending champions Bundesliga.

This game, which Bundesliga won by a score of 8–4, made it their third straight reign as UTM Intramural champions—and Karami’s four goals, including one via a penalty kick, were outshone by the performance of the new UTM Campus Rec Intramural Indoor Soccer record-holder Anthony Said, who scored five goals in the same game.

Karami’s goals against Bundesliga goalie Oliver Ulysse may have been the result of the goalie being brand new to the position. Ulysse, who normally plays forward, was limited to staying back and covering the net due to a torn ACL. “I was told not to play. I’m not doing any twisting of the knee or anything, and I’m doing all my jumping off my right leg—my good leg.”

Fazle Rabbee, the captain of Kollo Zalal, takes the high, graceful approach in defeat: “Those guys are the best players around UTM; I think we had a good effort…I think we played well and worked pretty hard as a team. And that guy Jad is sick—I hope we can keep him for the next semester.”

The Bundesliga roster finishes the game as laid-back as they came into it. Captain Ante Anton Trdina’s words reflect their confidence. “To be totally honest, we knew we were going to win,” he claims. “We won the men’s game, so this wasn’t going to be a challenge.”

Trdina is already guaranteeing that Bundesliga will be back next term for a shot at an unprecedented fourth straight championship.