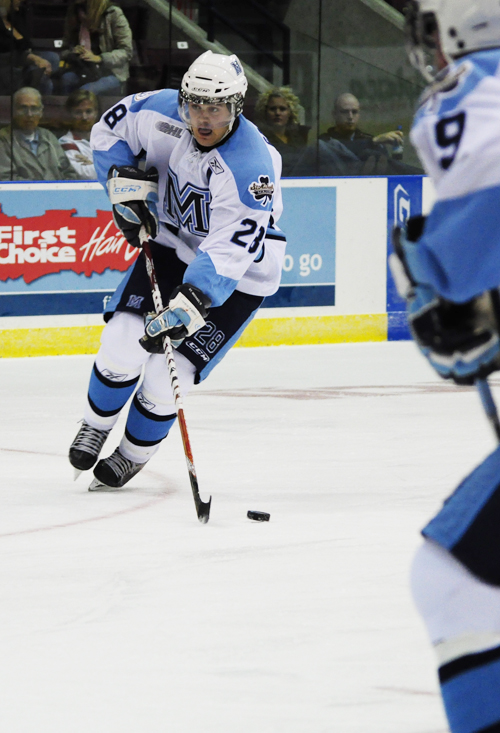 It`s not an easy goal. On one hand, Gaunces hockey career, thus far, has certainly been successful. As a junior player, he won the OHL cup with the Markham Waxers, which named him Team Rookie of the Year. At the Majors he was voted to the 2007-08 OHL All Rookie Team, ranking 12th among rookies scoring with 40 points at the end of the season.

Last season alone, Gaunce scored 17 goals and racked up 64 points in 67 games after the Colorado Avalanche drafted him in the second round (50th overall) in the 2008 NHL draft. Bearing enough physical presence, Gaunce won`t hesitate to throw his body around or to get into a fight or two. He lies among the team leaders in penalty minutes last season with 110 penalties in minutes (PIM).

Gaunce models his game after Calgary Flames defenseman Robyn Regehr, with whom he shares a sound hockey sense and very efficient defensive skill. He expects, however, to establish himself as more of a solid two-way player, becoming both a legitimate offensive and defensive threat for the opposing team every time he steps on the ice.

For all his success in hockey, Gaunce`s academic performance has been sub par. He will be the first to admit that he struggled during his first school year at UTM. I fell short of my own personal expectations, says the feisty six-foot-one defenseman. I could`ve done better, but getting used to the school-and-hockey lifestyle was pretty tough.

With such a busy hockey schedule, Gaunce had little time and energy to spare for academics. He found, despite being enrolled in only two courses per semester, that the combined workload was too heavy and he resorted to staying up late, desperately trying to catch up on schoolwork. The fact that he was taking introduction to economics and introduction to psychology, two notoriously demanding courses, didn`t help. Eventually, he fell victim to procrastination and let his homework pile up. Gaunce is heading into his third season with the St Michaels Majors. Matthew Filipowich/The Medium

Others might have dropped out of school, but Guance adjusted, just as he had adapted to different scenarios on the ice. During the latter half of the year, he developed a routine that allowed him to balance both school and hockey in a more efficient manner. The routine was simple enough, relying on structure and organization. Gaunce began prioritizing his time carefully and setting a rigid schedule that saw him rest when he returned home from hockey and eating something before throwing himself into the books.

I found near the end of the year that Id started to get a grasp of my studies a bit better, says Gaunce with a confident glint in his eyes. But this year hopefully I can start out better.

Gaunces journey through university will be longer and even more strenuous than the average students. But the final results matter the most. Tempting as it may be for a dedicated athlete like Gaunce to give up on school and focus solely on his hockey dream, including the millions of dollars that await him in the NHL, he has always considered education to be important to him. In fact, he values it just as much as hockey.

As for the fate of the Majors, which last season lost to the Brampton Battalion in six games in the second-round of the playoffs, Gaunce still expects nothing less than a trip to the finals for the upcoming season. With 19 players from last years roster partaking in the final days of training camp, the team, he says, should have better chemistry and should also be more prepared mentally and physically for the long road ahead. On September 18, Gaunce and the Majors will begin their quest for glory as they hit the road for their season opener against the Brampton Battalion at the Powerade Centre.