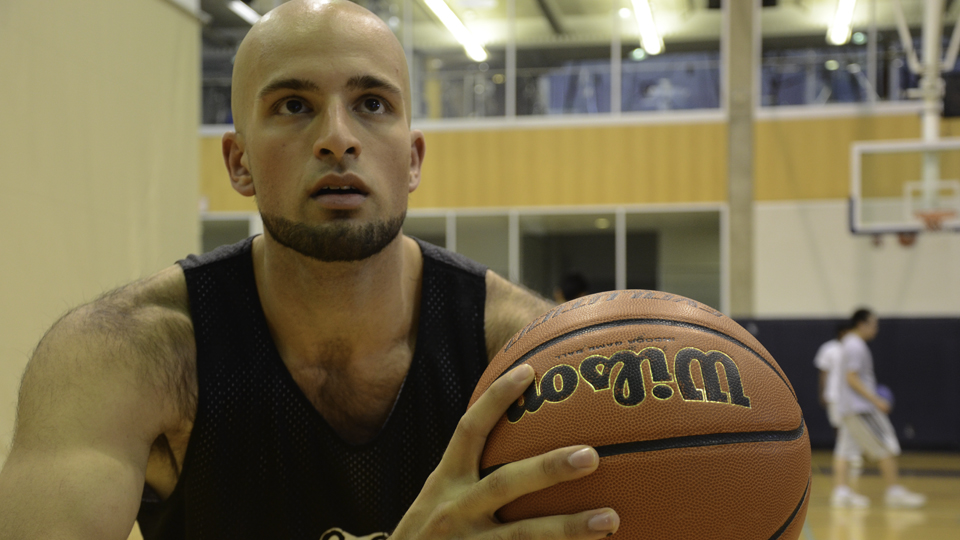 Now in his fifth and final year representing the UTM Eagles in Division 1 men’s basketball, small forward Faiz Ahmed is looking ahead to a promising and well-deserved athletic and academic year. Faiz has always spread his talents around, and his passion for sports is reflected in his array of accomplishments in basketball and football.

He began his basketball career at 10, when he started playing for a local team in the Markham Union Minor Basketball Association, at the same time playing for his team at Central Park Public School. He went on to play in high school at Upper Canada College and later at Markville Secondary School, where he was the captain of both the junior and senior basketball teams. His summers consisted of training at the Syracuse Orangemen camp, which was held at Syracuse University. “It was the best experience I had playing basketball,” says Faiz.

But the highest level of basketball he has played was a developmental league. He played for the Elite Basketball Academy under the coaching of the legendary Martin Keane. “He had us playing against amazing competition, including overseas pros and NBA prospects, most notably Andrew Wiggins and Jehvon Sheppard,” he says. (Keep an eye out for these two; they’re definitely on their way to the NBA.)

During his time at Upper Canada College, Faiz also played for the school’s football team. His love for the sport continued outside of school; he played for and was captain of the Markham Raiders for his bantam, in which they won multiple AAA provincial championships.

“I feel that football is the ultimate team sport, because for any given play to work it requires all the parts to work together in unison,” says Faiz. “I loved it for the fact that it allowed me to know that when I suited up with my teammates, we were preparing to battle and everyone had each other’s back. Games under the lights with my teammates are something I will never forget.”

In his senior years, Faiz played for and was captain of the Metro Toronto Wildcats. He later represented UTM in the intramural league for flag football last year, but they lost in the finals.

After he graduated from high school, Faiz’s credentials in football and basketball made him a frontrunner for a chance on a university team. It was in 2008, his first year at UTM, that Faiz was selected for the Division 2 men’s basketball team. That’s not to say it was all smooth sailing. “Playing a year at Division 2 definitely helped ease my nerves. I was initially upset about this, but it allowed me the opportunity to get a lot of playing time and be a big contributor to the program right away,” he says. Playing Division 2 was certainly a learning experience for Faiz, and it allowed for an easier transition from playing at a high school level to playing at UTM. Nevertheless, the following year, Faiz was selected for the Division 1 team, proving to himself and to his peers that, as he says, “I was ready for the challenge and knew I belonged.”

Playing at the Division 1 level, Faiz has truly displayed his own skills and strengths. He has a decent build and has demonstrated his skills on all areas of the court, both offensive and defensive. But he does have a favourite position. “My primary skill is that I’m a shooter. I love to shoot. Give me the ball anywhere on the court and I’m confident I’ll get it into the hoop,” he says. “I also have pretty good size and strength that I use to my advantage. If there is a ball up for grabs, I will bully and hustle everyone to make sure it’s mine. As well, I’m a pretty good defender; on defence, I like to dictate the play. It’s something my coaches have instilled in me, and I enjoy making it difficult for the opposition.

“I also am real talkative and loud. I think that this helps motivate us on the court,” adds Faiz. It is through this confidence and determination that Faiz is able to drain buckets and pose a serious threat to the opposing team in a game.”

Nonetheless, Faiz doesn’t claim full responsibility for his and his team’s success. He owes a great deal of gratitude towards his fellow Eagles teammates and the amazing coaching staff here at UTM. “Our coaches, Ammer and Anish, are two guys I really respect,” says Ahmed. “They treat us like men and they teach us the game like men. That, along with support from my teammates, has helped me become more confident when I play.”

The Eagles have lost a few key players from last year’s roster, but Faiz and his teammates are confident that all the hard work they’ve put in this summer will put them in a position to win the league come March. Faiz himself has put in endless hours of training this summer in preparation for his last season with the Eagles.

“I’ve worked really hard this off-season to improve my fitness,” he says. “Early mornings in the gym for conditioning or strength training, followed by on-court workouts, will get me prepared. I got a personal trainer at UTM [Darren Turner] and even went to Florida to train with Alan Stein [Kevin Durant’s trainer]. The knowledge I got from these two guys has put my fitness at a new level and I can’t wait to show what I’ve accomplished in that regard.

“This is going to be my last year at UTM, and I want to go out with a championship,” he continues. “We are going to win the championship; too much hard work has gone into this not to.”

His passion for sports is undeniable, but his love for psychology may be his most unexpected and intriguing  quality. Faiz is currently in his fifth year as a psychology major with minors in biology and sociology. He is extremely enthusiastic when it comes to talking about psychology. “I could go on forever about how psych has helped me as a basketball player,” he says. Nevertheless, he adds, “Sports psychology doesn’t create talent, it helps release it.”

Faiz credits psychology with driving him to become the best athlete he can be, and an even better teammate. “With psychology, I understand my teammates better and how to approach each of them individually, whether it’s to push them or talk about a play. Personally, psychology helped me realize that you can never be better than your self-image. So, using sports psychology techniques, I have worked to expand my self-image of me as a basketball player and my skills.”

Faiz Ahmed is an amazing athlete, an outstanding student, and a down-to-earth guy. It is these attributes that will help him achieve his future goals: he wants to pursue a career in both psychology and basketball. He aspires to coach the game, which he has already begun to do at his former high school and for the Mississauga Wolverines. As for psychology, Faiz plans on doing graduate studies in sports psychology, but is waiting for the right time to apply.

Faiz has been an integral part of the basketball and flag football team, and UTM has been privileged to have him as a student and as a member of the university.