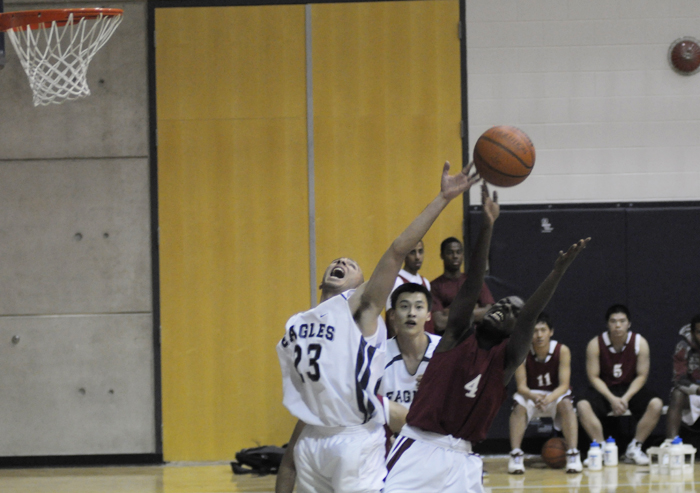 In their first game of the new semester on Wednesday night against the UTSC Racoons, the Eagles came out strong and never looked back. By the end of the night, they earned themselves a well deserved 62-44 victory on their home court against a normally chippy UTSC opponent.

Taking advantage of UTSCs sloppy play and careless turnovers, the Eagles went on an 11-0 run to start the game, prompting the Raccoons coach to call a timeout not even five minutes into the half. Perhaps well-rested from a month long break, the Eagles simply did all the right things.
On offense, the Eagles played very determinedly, hustling on every play and driving to the basket whenever they got a chance. They were able to sink many wide open shots as a result of the efficient passing and ball movement they demonstrated throughout the game. The consistent offensive pressure was too much to handle for the lethargic UTSC Raccoons. The Eagles went into halftime with a 38-17 lead and put the visiting Raccoons into a deficit that they were never able to recover from.

Starting guard #13 Kent Bray showed impressive composure and leadership as he led all scorers with 14 points on the night, including a momentum building three pointer just minutes before halftime.

As dominant as they were offensively, it was the Eagles defensive game that truly set the tone. They were forcing travelling violations, deflections and steals consistently all night. As the Eagles were applying the full-court press for most of the game, the Raccoons often found it difficult to even pass the midcourt line. By trapping UTSC guards into making quick rushed plays, the Eagles were able to force turnovers and get many fast break opportunities and easy lay-ups.

Notably, back-up guard #23 Elias Sbiet gave UTSC fits with his persistent and pesky defense. Giving them no room to breathe, the Raccoon guards were unable to set up their offensive scheme or penetrate to the basket, forcing them into taking chaotic shots and even several air-balls.

A minor scare occurred in the latter part of the second half, when Eagles #12 Marc-Justin Harder was sent to the floor and hit the back of his head while driving to the basket. To the disagreement of the fans in attendance, no foul was called. Fortunately, once the Eagles called a timeout, Harder got up on his own accord and walked towards the bench. He appeared to sustain no injuries on the play.

The Eagles defensive pressure was the key difference maker in the game and set the two teams apart. Unlike the Eagles, the Raccoons applied little inbound pressure and did nothing to disrupt the Eagles offensive flow. By not engaging defensively, they allowed the Eagles to essentially walk the ball up the court freely and establish their presence on the perimeter and in the paint. Because of this, the Eagles were able to build momentum and put the game out of reach early.

Eagles coach Ammer Askary was particularly impressed on how his team was able to execute the offensive and defensive strategies he laid out for them.

We want to pick up the tempo when we can and be patient when we can, said Askary. Thats why we tried the full-court press and went back to half-court press sometimes.

The mixture of timely poise and aggressiveness is what Askary ultimately preaches to his team—and what will allow them to be more effective each game they play.

He also has high praise for the teams preparation and the efficiency of the starting rotation.

We had a good practice yesterday and a solid win today, said Askary. Our starters did a good job and they held the lead pretty well.
After this solid victory, Askary feels confident about his teams depth and gradual improvement each game. Heading into the latter half of the season, the timing is perfect for the Eagles to possibly start up a sizable winning streak and widen their lead in the division 1 standings.

I think we are running into form, said Askary. Our eight to nine guys we are getting ready for the rotation will be fine.
If their play on this night was any indicator on how the rest of the season is going to play out, the Eagles should have no problem capturing the U of T Intramural championship title.

The Eagles next home game will be against the same UTSC Raccoons on February 10 at 8 p.m. Expect the next bout to be more competitive as the Raccoons look to seek revenge after this embarrassing loss.