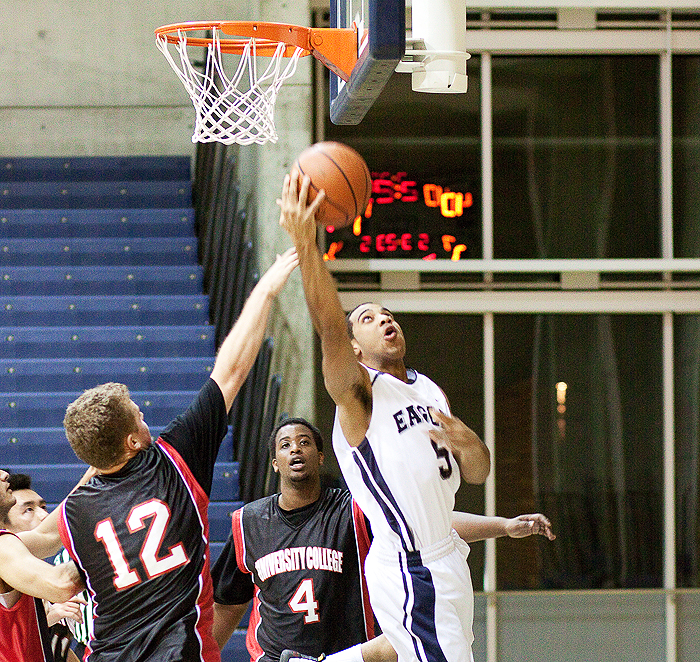 UC forwards responded quickly to their miss, securing two consecutive rebounds and a two-point jump shot. UTM came back with a turnover of their own by Joshua Sumi. Sumi and Julian Gentles, who displayed stellar passing ability, finished off their sequence with a dunk attempt for two points.

While UTM showed more core basketball competency than their opponents, UC players showed a commendable willingness to keep up with the UTM team despite a lackluster UC bench.

UTM player Elias Sbiet led UTM with strong defensive presence and continuously stopped UC advances in the key. The Eagles also got a lot of free-throw practice, as they felt a strong referee presence during the majority of the game.

With only three minutes remaining in the first half, Kent Bray showed a burst of energy as he dribbled past two UC defenders to sink an effortless layup. A foul on the following play allowed Faiz Ahmed to add one more point to the already significant UTM lead.

Play began to die down as time dwindled, until UTMs Elias Sbiet lit a match under the Eagles in the last few minutes of first-half play. Sbiet showed aggressiveness on defense that led to a scoring opportunity shortly after.

The second half of play saw a handful of successful free throws and great passing sets by UTM.

The cohesion of the UTM team shone through when the play was calm, such as the end of the second half. Andre Woodroffe benefitted from this reworked strategy when he rebounded a missed UC free throw. Woodroffe drove a straight pass to UTMs Sbiet, resulting in a play that overtook the court and UC. Sbiet lifted the ball towards the net in a pass to Woodruffe, showed he wanted a basket, propelled himself into one of the highest jumps of the game and slammed in a two-pointer. UTM ended the game with seventeen fouls; UC had nine.

Passing and unselfish play are the Eagles strengths. They seem to sense when a good passing opportunity is available. (Their dynamic, however, tends to fall apart when they try to make fancy passes instead of safe, sure passes). They also know when to be a bit selfish in the drive towards the basket. The key to the Eagles game is to calm down the play and make strong, crisp passes.
The next mens division 1 home game takes place on January 20 at 8 p.m.