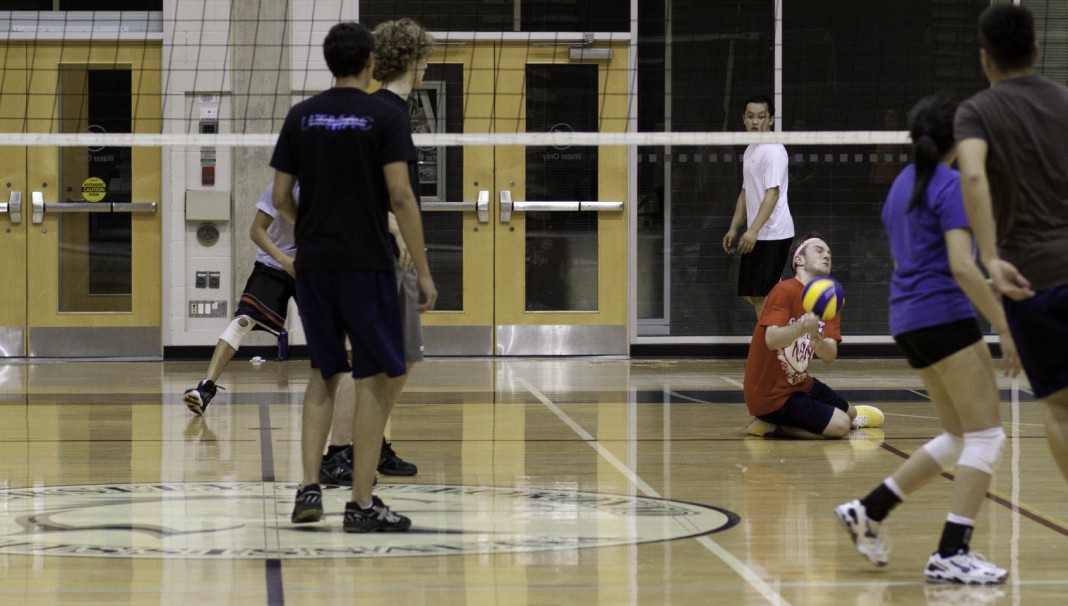 Physical activity is not my forte

Gym class was always my least favourite. I did the bare minimum and nothing more. I devised dodgeball strategies, bargained with the gym teacher until he would allow me to run one less lap each day, and found ways to distract the other kids from noticing my weaknesses in order to ensure that I was seen as Funny Chris and not Pathetic Chris.

I knew when I came to UTM that unless Hell froze over and a baseball team was born, I’d stick to watching sports and wouldn’t participate in any of them. In fact, it was only a few weeks ago, in my fourth and final year at this lovely institution, that I discovered that most of the activities at the RAWC were free for students. You get the point: I’m not much of an athlete.

With this in mind, I still jumped at the opportunity to try out for the tri-campus volleyball team. I wanted to get a feel for the athletic experience at UTM. That, and I wanted people to once again see me as Funny Chris after I wrote this classic article documenting the hilarious event.

Time to win some hearts and minds

I walked into the main gym at the RAWC looking like a fool but feeling like a star. The room looked familiar—I had written several exams there—but the faces and volleyball nets did not. I had low expectations, and to ensure that my ego didn’t take a blow I made sure not to dress the part: I wore pink socks and a silly headband in an effort to let the world know that I’m just a shameless schmuck looking to experience something.

Unfortunately for my calves, knees, lower back, and lungs, I’m the kind of guy that always tries his best at things. Within 15 minutes of the tryout, I was disoriented and out of breath. According to the other players, this stage was called the “warmup”.

The ordeal (and yes, it should be called an ordeal) was intense but got progressively more fun as the night went on. We began with some drill-type thing where we hit balls over nets, but I suppose those of you that know volleyball were sort of expecting me to say that.

Unfortunately for the poor soul that got paired with me, I was pretty bad at this part. We then got into some heavy-duty volleyball stuff, and this was intimidating at first. We did this other thing where a ball was thrown up in the air and we were expected to jump up and smash the ball with our first.

If there were an award for Most Erratic Spiker, I would have won. I thought the point was to hit it hard, so I went all out. On three separate occasions, I narrowly avoided hitting spectators that were sitting on the left hand side of the gym on the bleachers. Sorry about that, guys.

A special thank-you goes out to Britney, who lobbed the balls up to a level where this 5’11” nerdy type was able to reach them. I’m not much of a jumper, but she recognized this early on and made the proper adjustments. Thanks, Brit.

We then moved on to this drill where we had to return serves—and boy, did I suck at that. Those balls come at you pretty fast; our UTM athletes play for keeps. On several occasions I fell to the floor, and my hand got caught in the net at one point. The coach allowed me to serve, but was under the impression that I wasn’t completely useless, so when I was unable to get the first one over the net he said, “What the heck, Chris?” and I determined that serving wasn’t for me.

The bulk of the tryout was spent in a game situation in which two teams were formed. I bet you didn’t see that coming, did you? Yeah, we played volleyball at the volleyball tryouts.

By my count, I was 2 for 6 in this game. I properly hit the ball to my teammates twice and the other four times weren’t pretty. I distinctly remember one instance when I realized the ball was coming straight for me and I raised my right arm in a last-ditch effort to keep the play alive. By the time my arm was raised, the ball was bouncing off of the wall behind me and my teammates were giving me the look that Vader gave his minions right before he choked them.

Does the team need a water boy?

The one thing I really enjoyed throughout the night was chasing after the balls (they call it “shagging”). In fact, head coach Stew Arevalo told me after the tryout that I was the… best shagger. Surprisingly enough, he actually had some nice things to say about me. This was a little disappointing because this article would’ve been funnier had I been deplorable. Oh well—you win some, you lose some.

“Disco Stew”, as I like to call him, also said to me that I was excellent when it came to “energy and intangibles”. The praise continued as he added, “You were alert, fast, and as a defender were in the right spots. You didn’t have the technique, but that can be taught.”

The one thing that I never could figure out was the terminology. The downside to all of that time I spent in gym class trying to figure out why girls didn’t like me and guys saw me as a novelty act and not a legitimate “bro” option is that I wasn’t paying attention to the gym teacher. My gym teachers probably mentioned that muscles atrophy when they don’t get used and that stretching isn’t a wasteful exercise to laugh about and never engage in. Oh well—I learned those lessons at the tryout.

Coach Stew refused to side with my self-deprecating evaluation. He told me, “The world is full of people that do things halfheartedly, and short on those that are crazy and nutty like you. I like those people.”

Once the tryout ended, we were told that we would receive emails informing us about whether or not we made the team. I don’t need to open my inbox to figure that one out.