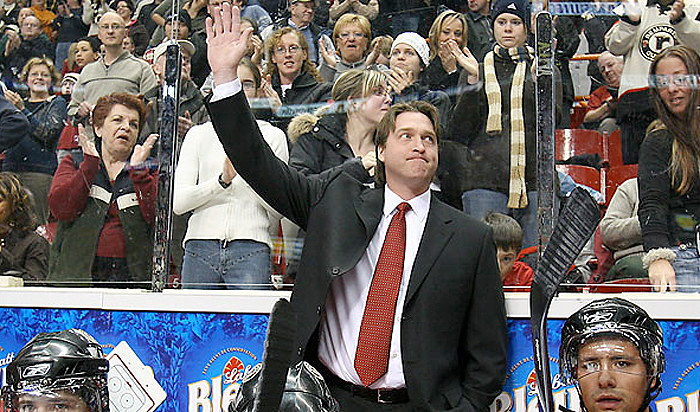 Cheap shots in Junior Hockey have been the main story in sports lately, thanks to two different head shots with intent to injure this past week.

First, Sabres prospect Zach Kassian jumped into a hit on Barrie Colts player Matt Kennedy. It was an innocent looking play, where the puck was deflected up into the air and Kennedys head was tilted up looking at the skyward puck. Kassian took six strides and jumped into Kennedy, nailing him with a shoulder to the face. Kennedy suffered his fifth concussion of his career and needed three stitches and three staples on the back of his head.

The OHL came down hard on Kassian, suspending him for 20 games.
Players must understand that they shall be held accountable for their actions and we must continue to work to improve the level of respect players have towards opposing players, said OHL Commissioner David Branch.

The hit came in the same week as Patrice Cormier nailed Mikael Tam with a vicious, blatant elbow at centre ice. Without touching the puck, Tam was skating into the play when Cormier blindsided him with the elbow, immediately sending him to the ice. Tam began to have seizures and convulsed on the ice for several minutes before he was carted off to the hospital. Hes been diagnosed with brain trauma, a concussion and several missing teeth.

As of January 10, Cormier has been suspended indefinitely from hockey and could face criminal charges, according to the Quebec Major Junior Hockey League (QMJHL).

This was not the first incident  where Cormier has pushed the legal limits on a hit. In a World Junior pre-tournament game against Sweden, he elbowed Anton Rodin, who was skating to his bench. There was no call on the play, but it was caught on tape and was a blatant attempt to injure an opposing player. This will also be taken into account as he is a repeat offender and it does not bode well for his case.

If the Liambas incident is any indication, Cormier will not play another Junior hockey game in his career. Former OHL player Michael Liambas was suspended for the rest of the 2009/10 season and playoffs for the devastating body check he laid on Kitchener Rangers defencemen Ben Fanelli on October 31, 2009. After the hit, Fanelli laid unconscious while twitching and foaming at the mouth. Shortly after, he was rushed to the hospital in critical condition with skull and orbital bone fractures. He was eventually released from Hamilton General Hospital a week later on November 6.

Although the Kassian incident was completely different from Cormiers, he was still suspended 20 games for a shoulder to the head only because the player was in a vulnerable position. It looks, however, as if Cormier blatantly meant to injure Mikael Tam (he skated two meters with his elbow up).

Cormier should not be worried about hockey (as he should not play again in Junior), but rather worry about an assault charge instead.