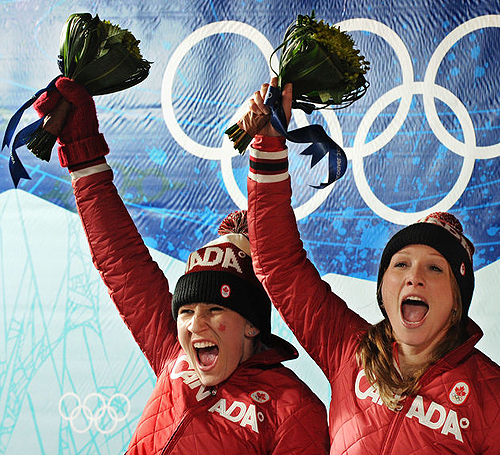 Since its Olympic debut in 2002, Canada has yet to win a medal in women’s bobsled—until now. For the first time in Olympic history, Canada took first and second place for women’s bobsled, which also marked the Canadians’ first gold-silver triumph in the 2010 Games and helped us surpass the seven gold medals won in Salt Lake City in 2002.

Smashing track records in heat one, two and three at the Whistler Sliding Centre, Kaillie Humphries, a downhill skier from Calgary, and Heather Moyse, a national team Rugby player from the University of Toronto, won gold on home soil last Wednesday.
Speeding across the finish line, Humphries, the pilot, and Moyse, the brakeman, were greeted by cheering fans and waving red and white Maple Leaf flags.
At the 2006 Torino Olympics, Moyse and former partner Helen Upperton missed the podium by only 0.05 seconds. “Losing by five hundredths of a second, that’s why I came back to bobsled,” said Moyse of her fourth place finish four years ago.
Moyse and Upperton raced together at the 2006 Olympic Games. Although they did not finish on the podium, many believed that with four additional years of training, they could win gold. Others thought that the best they could hope for was a medal position, given the fact
that they would be racing with new
teammates .
But when Moyse found Humphries as a new driver and Upperton joined brakeman Shelley-Ann Brown, both teams seemed to complement each other. Moyse and Upperton did reign in different sleds, although they were still able to share the Olympic glory. As Moyse and her partner captured gold, Upperton and her partner Shelley-Ann Brown overcame a subpar start to capture the silver medal.
“So many people own a piece of this medal,” Upperton said in an interview with CTV. “I wish I could break it into like a thousand pieces and give it to all the people that helped us, because no Olympic medalist gets here by themselves and we are very lucky to have so many people helping us.”
People around the world continue to view the Whistler track as a controversial course. But the Canadians demonstrated that the Whistler track could be defeated without struggle.
“It hasn’t quite set in yet,” Humphries told CTV about her gold medal win. “When it does, I’ll be bawling.”
During the medal ceremony on Thursday evening, Humphries and Moyse danced on the podium with happiness. As they sang to the national anthem, screaming fans whistled and cheered at their country’s success.
Although both male and female athletes fear the Whistler Track for its speed and dangerous turns, both Canadian teams were determine to make it to the top. These women have made history at the 2010 Olympic Games.