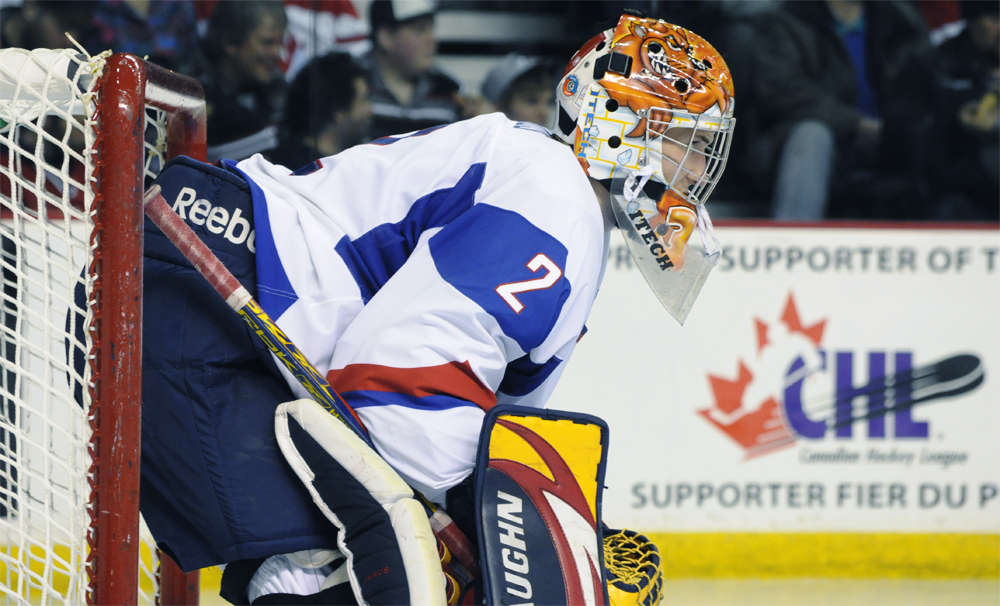 Canada defeats Slovakia 7-0 December 23rd at Hamilton’s Copps Coliseum in their last of three IIHF exhibition games before heading to Ottawa for the tournament to begin.

It was rough night for those driving through the furious blizzard with fans from all over Southern Ontario. If you were at home, it was nothing but a warm evening in, a cup of hot chocolate and a massacre on the ice of Copps Coliseum.

It was a lopsided match for the Canadians, especially when Canada out-shot Slovakia 41-20 with a 7-0 win. However, Slovakia’s goaltender, Jaroslav Janus did take the prize for Slovakia’s best player. Canada’s own Cody Hodgson finished the night with three assists and 9 points overall after all pre-competition games. John Tavares and Zach Boychuk netted two starlit goals that shook Copps and Hamilton off the ground, especially after Tavares’ puck juggle that he smacked in from mid-air. The fans witnessed a little magic from these future NHLers.

On the other end, besides Janus, there was not much to say about the Slovakians. The passing was not effective and they struggled for an opportunity at the net. The Canadian’s defense assured a clean slate with Chet Pickard picking up the first shutout of the tournament.

The defense commanded the ice with Slovakia trying to push the puck through the neutral zone. Their power play, with Ryan Ellis quarterbacking, assured smooth puck cycling with most of the possession in Slovakia’s zone.

There was also some hesitation. No defenceman could commit to a shot on net during the power play. It was sad to see every Canadian defender dawdle with an open opportunity. Instead, they allowed the forwards to take care of that department.

PK Subban and Keith Aulie showed their presence against the boards and struck a little fear from their opponents. Otherwise, the whole pre-competition instilled a Quinn forechecking style with a series of non-stop scoring. It seemed the Canadians were a little ruthless at their attack, but Quinn thought different.

“The score was nice, our pucks went in but there are still some areas that we have to work on when we don’t have the puck,” said Quinn after the game against Slovakia. “We still need to work on our defensive zone play.”

Canada’s first preliminary round game is on Boxing Day (Dec 26), and with three wins against three different threats, is Canada ready for gold?

They look quicker, smarter and more physical than last years gold medal team, so this should mean they will have another go at gold? Not until they face rivals team USA, who seems to be the only threat for Quinn.

With Avs’ prospect Kevin Shattenkirk at the back end and returning forwards James van Riemsdyk and Jordan Schroeder, team USA stills has some fight. The demolished Germany in a 8-2 win and are accompanied with Canada in the preliminary round with their match on Dec. 31. It will be a New Years Eve to remember for the young guns.

Canada is optimistic about their presence on the ice, so far. With leaders like Angelo Esposito stepping down as a top play-maker and goal scorer into a checking line centre and a penalty kill specialist. Esposito plays for QMJHL’s Montreal and is a guarranteed starter on Atlanta’s roster next season; this is a definite change in roles for the soon-to-be NHL leader and shows the maturity of what a leader will do for his team to win.

“Every team needs a third line centre and checker and it’s just a change in pace,” said Esposito when talking to the Medium. “This let’s me see the game in a different point of view which will help me in Atlanta. I’ve always been playing as a finesse player on the first line for Montreal and this role is just helping me with my career.” Kane changed his pace with a grittier game to accompany the natural goal scorers such as Tavares. His speed and balance was a boost for the small battles against the boards and to take the puck through the neutral zone.

Besides change in roles, Quinn suited each player to the team’s needs with players like Boychuk and Hodgson as the neutral zone puck carriers and Tavares as an offensive zone pressure, each player holds a specific role for each play of the game.

“You have to be creative. John [Tavares] works his best offense in the offensive zone, from the blue line as he works his way to the net,” said Quinn. “Through the mid-ice he his a good player, but that’s not exactly where he shines. And then loose pucks… certain players can pick up those loose pucks and then they can work it into the zone to players like John.”

Team Canada are the favourite to win the Gold a sixth straight time and there’s no doubt that they won’t work for it. Quinn has revolutionized the team, with a new power play system, offensive arrangement and an aggressive back check that will be hard to dodge.

There’s a long road before the medal round and it’s time to see if Canada can keep up the momentum on home ice.

“We have four more games to make sure we are ready for the medal round and in those four games will fix our holes,” said Quinn.