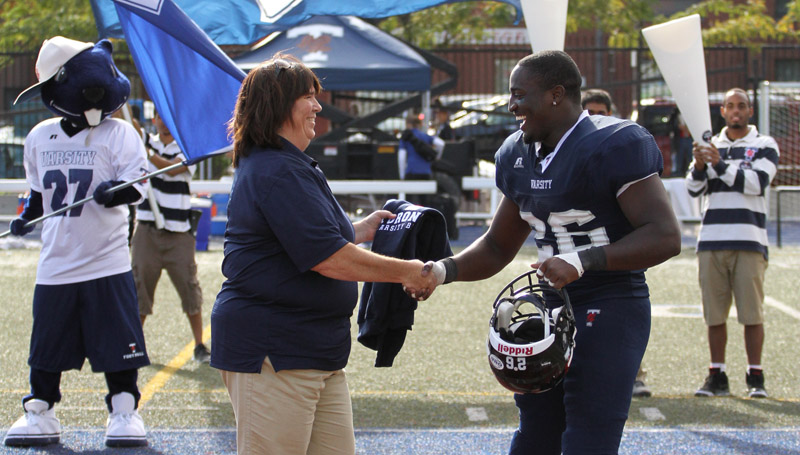 There are a few reliable resources an athlete can depend on: their teammates, their friends, and their family.

Whether it be on the gridiron, in the classroom, or at home in Rexdale, Varsity Blues football stars Kevin Asare, a linebacker, and Michael Prempeh, a wide receiver, share a relationship that shows us all what it means to be a teammate, a friend, and a brother.

The two met each other in 2000. Their friendship was initially captivated by commonality as adolescent Ghanaian-Canadians who lived in the same apartment building: 2777 Kipling Avenue in Rexdale, Toronto. As middle school classmates at St. Angela’s Catholic School they came of age and learned of life’s difficulties and lessons—together.

Prempeh’s companionship was instrumental for Asare, who was still coming to terms with the death of his mother a year prior, an ordeal that left behind a son, daughter, and husband.

“I think she would be proud, because I come from a tough situation. Playing football and coming from a single-parent household, it’s kind of tough, because most people go home and they have their food there and everything, but I’m going home and I have to make my own food or I will go to bed hungry. But then, sometimes, having Mike—being able to go to his house was helpful.”

Kevin, now 23 years old, reciprocated the feeling of brotherhood for Michael, 22, who was the youngest of five siblings where the closest in age was 10 years older. “Having Kevin around, it’s easier for me to relate to him. We do all the same stuff and we’re always together. Having him around is having another brother,” Prempeh explained.

The two have been football teammates since 2003, playing for the North York Grizzlies house league team, the Etobicoke Eagles rep team, and the Father Henry Carr high school team. Asare and Prempeh came to UTM in 2007. Kevin spent the 2006 season alone as a member of the York Lions football team, while Michael enjoyed his last year as a high school senior at Sir. Edmond Campion Secondary in Brampton.

Asare, after one season at York, transferred to UTM to join the Varsity Blues. The Blues and other OUA teams were actively recruiting Prempeh. Consequently, it was Kevin’s transfer that served as the selling point for him to join the program. “He called me every day,” said Prempeh.

“I was the second John Smith [the former Varsity Blues’ recruiter],” Kevin quipped.

Together they worked on a vision to be difference-makers, and to ensure they would not become products of their environment. Jokingly described by Prempeh as “two black boys from the ghetto”, the pair challenged themselves by committing to joining a very turbulent football situation, brought in by Steve Howlett, then head coach, whose Blues had been winless since 2001.

The two persevered through a difficult first year on campus, adjusting to life as students in Mississauga and on the field.

Asare pointed out, “ ’Sauga’s a different city, man. It has more of a middle-class environment, more wealthy people. Now, where we come from, we know what the ghetto is. Coming to UTM, we both can laugh at the same things because we’re not used to it.”

Their first year at UTM was unique and very difficult. Together, they got their first taste of a winless season. The pair were humbled, receiving playing time only sparingly and with only subordinate roles in the team’s initial setup.

Refusing to be deterred by the adversity they faced together in year one, Michael and Kevin battled to become starters. Their work afforded them the chance to be on the field for the team’s first win in almost seven years on September 1, 2008, when they defeated Waterloo 18-17. It’s evident that their vision to be difference-makers has come to fruition; the Blues have not seen a winless season since.

It’s been five years since Asare and Prempeh’s arrival to UTM. Together they have seen many changes in their roster and coaching staff.

Saturday’s 21-12 defeat of the Guelph Gryphons, the Varsity Blues’ first nationally televised game on The Score’s University Rush series, was important for the team, which now boasts a 2-1 record.

For Prempeh, the outcome was a “statement win”, he said. “It’s a big step, for not just us, but the whole team. It gives a chance for the nation to see we’re not the same team we have been for the last ten years, and we’re on the come-up.”

When he puts life into perspective, Kevin, whose mother never met Michael, has an idea of how she would see their bond.

“She would be proud. I think she would be really appreciative of Mike if she met him, because he’s been there and he has supported me so much. She would probably see how I’ve grown up, how we’ve grown up, and see that he’s been an influential part of my life. We’re brothers.”