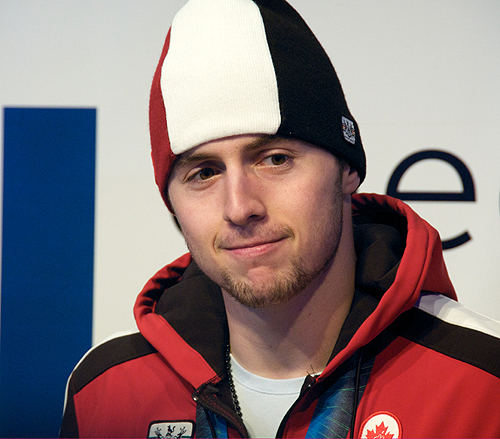 Bilodeau started on the World Cup circuit at the age of 18, where he captured rookie-of-the-year honours. He won his first World Cup race in 2006. He switched to moguls to improve his skiing technique, and found his passion there.

Did that switch ever pay off.

Bilodeau was considered a medal contender before the Games. Reporters, however, regarded him as inconsistent. But Bilodeau saved his best for last, dethroning the Canadian-born Australian Dale Begg-Smith for the gold medal and sending the Canadian crowd into a frenzy. He tore through the moguls with precision and the judges awarded him with a 26.75, which proved good enough for first place.

Following the race, Bilodeau ran to his brother Frederic, who was diagnosed with cerebral palsy at age ten. When asked how much of the gold belonged to his brother, Bilodeau replied, “A lot! … My brother is my inspiration. Growing up with handicapped people puts everything back in perspective, and he taught me so many things in life.”

Bilodeau believes that he needs to take any opportunity possible to train despite weather conditions because Frederic does not even get the chance, as he is confined to a wheelchair.

His older brother may be his inspiration, but Bilodeau has inspired millions of Canadians. When the gold medal was presented to Bilodeau on Monday night at B.C. Place, the capacity crowd erupted into pandemonium, with thousands of flags waving and cowbells ringing to congratulate the victor. He received a call from the Prime Minister, congratulating him on his accomplishment,

In an interview following his achievement with The Toronto Star, Bilodeau said, “This gold medal is just as important to this nation as any medal we earn. We will win more gold medals and I am glad I could bring this home to Canada. I want to thank my family for their support over the years, and my older brother for being my inspiration.”

Bilodeau then invited Dale Begg-Smith and bronze medal winner Bryon Wilson onto the first place podium to share his accomplishment (even though an Australian coach had previously protested Bilodeau’s victory over Begg-Smith).
As of Sunday, Canada has won four gold medals, and hopes to increase their medal count heading into the final days of the Olympic games.