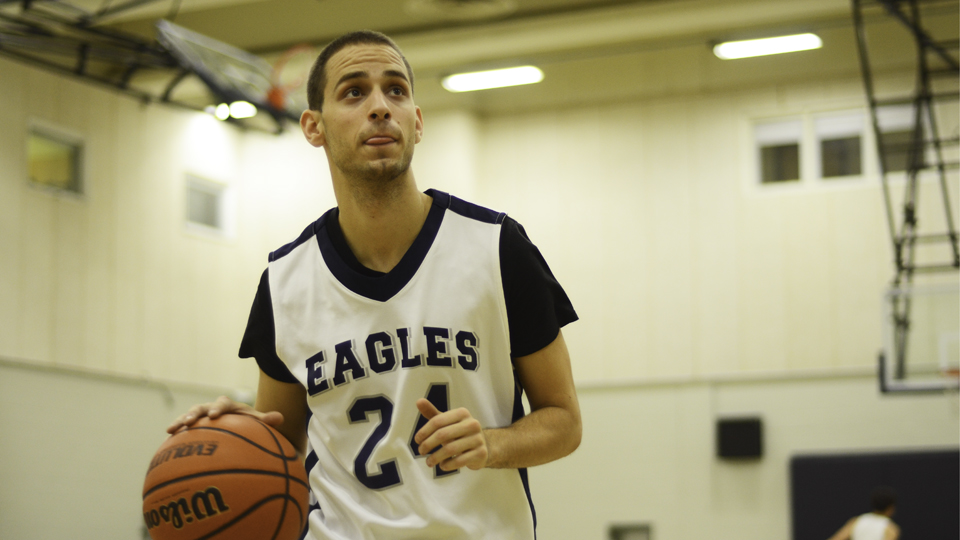 It takes heart, competitiveness, and dedication to be a successful leader. As the world has taken heed of the recent U.S. presidential election, it has never been clearer that leadership is of utmost importance. Leaders of nations, cities, companies, and even sports teams have to put in the time and effort, and deserve respect.

Anthony Krmek, a UTM Division 1 basketball player, earned his role as leader of the squad thanks to his experience. He’s a fourth-year student at UTM specializing in sociology and minoring in psychology and philosophy, as well as a personal trainer, referee, and control desk attendant at the RAWC. “I’m a sports fanatic and have been around basketball for as long as I can remember,” he says.

Krmek began his sporting career on the soccer field at a young age; he attributes his switch to the world of basketball to his exposure to watching the NBA and superstars like Drazen Petrovic, a New Jersey Nets shooting guard from Krmek’s home country of Croatia.

“He put my country on the map in terms of basketball,” says Krmek, who religiously followed his favourite player, particularly admiring his work ethic. “He was the first guy in the gym and the last one to leave.”

This consistency inspired Krmek not only in basketball but also in life. “Petrovic’s attitude really spoke to me on many levels,” he says. Another NBA superstar who inspired the young Krmek was basketball legend Michael Jordan.

Krmek’s passion for basketball grew as he climbed the ranks from a house league to the representative level to his high school team, all the way up to varsity basketball. His family also played an important role in upping his game. “My cousin Joseph played a big part in cultivating my love for the game,” says Krmek. “Whether it was shooting hoops with me or putting me through a new training regimen, he was always there to support my growth as a player and person.”

As Krmek assumes the role of leader, he is well aware of his responsibilities to his team.

“Being one of the older and more experienced players on the team, I try and be as vocal as I can to promote a team mentality. Having coached before myself, I’ve come to understand and value the importance of playing as a team with all five guys on the court, as well as the bench, working towards one common goal,” he says. “At the same time, we have a great head coach in Juan Nunez and a knowledgeable assistant coaching staff that are always pushing a ‘team first’ mentality.”

Other experienced players, such as Zak Khan and Juan Ariado, have taken on leadership roles on the UTM Division 1 White team. The group seems to be effective in cultivating younger players.

Krmek is aware of all the UTM basketball program has taught him.

“Whether it’s learning something new at practice or just getting your repetitions in as you work on your shot, you become a better player by being in the gym, around the game, on such a consistent basis,” he says. “Lastly, just playing with the guys day in and day out has really helped us create a close bond in which I’d say we’re something like a family. We joke around, we coach each other, and at the core, knowing that the guy beside you trusts in your ability to perform as you all work towards a common goal does wonders for your confidence as a player.”

He offers his advice to UTM students who plan to try out for the basketball team in the coming years. “If you’re not in the gym working on your game, taking skill tutorials online, or constantly trying to figure out the strategies and plays of a given team, you won’t improve,” he says. “Surround yourself with the game of basketball and you’ll be the game of basketball. Like anything in life, basketball requires you to be both a student and teacher of the game. It’s a real pedagogical approach.”

Krmek is certain his future and his passion lie in coaching. “I hope to take all of my knowledge, experience, and philosophies as both a player and person and translate that into a winning and meaningful model as a coach,” he says.

He has already coached and won at different levels—the house league, the representative level, and a year ago with UTM Division One women’s basketball—and he now wants cultivate his coaching ability. “I am slowly becoming a coach who knows the game and can really get the best out of his players,” he says. “And the reward I get as a coach when a player improves both on and off the court is something I live for.”

Krmek looks ahead to the season as a challenge he believes his team is prepared for. He is certain that the team motto, “ICE”—head coach Nunez’s acronym for “intensity, communication, and execution”—will guide them as they come closer to a championship.