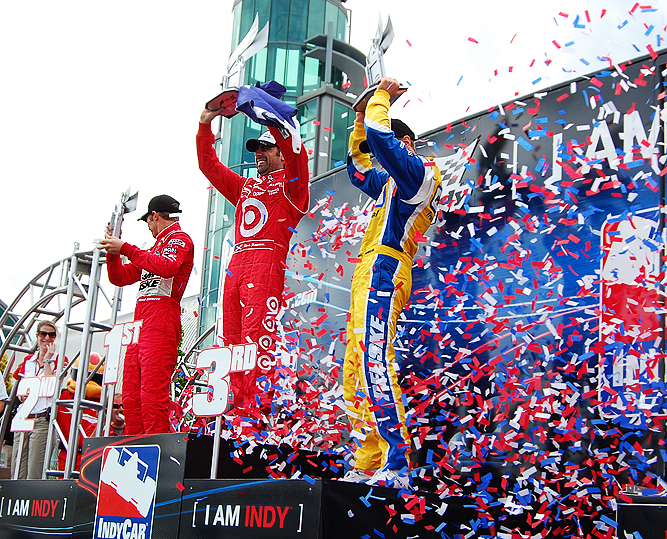 In a race full of literal and figurative twists and turns, Dario Franchitti earned the first place in the IndyCar series, ahead of teammate Scott Dixon. His victory was not an easy one, as there were as many as seven lead changes among five different drivers. Only fifteen of the twenty-three drivers managed to even complete the full 85 laps, with six drivers unable to finish due to contact and another two as a result of mechanical errors. By the end of the race, there were a total of five caution flags over a range of fifteen laps.

Dancing with the stars contestant Hélio Castroneves did not emerge unscathed from the crash.  Nearing the end of the race, he had to pull out due to damage to the front end and rear suspension. Castroneves later insisted that the crash was not deliberate. [Paul Tracy] would be the last I would’ve have taken out here in Canada, said the Brazilian. I thought I gave plenty of room for this guy. But his car touched mine and I just lost control. A plethora of boos rained down on Castroneves shortly after the incident.

As for Tagliani, the remaining Canadian, he ended up 9th despite leading the race for twenty-one laps. He nearly suffered the same fate as Paul Tracy when he ran into Tomas Scheckter on lap 74. He managed to stay in the race, but the incident took him out of contention and ruined any chance he had of winning.

One of the biggest disappointments of the evening was the performance of Graham Rahal, the third place finisher after yesterdays qualifying rounds. Today, however, he was surpassed by Danica Patrick, even though she started the race far from the leaders in 18th place, and on lap 59 he had to pull out of the race after crashing with Ed Carpenter. It was a frustrating day for the Mcdonalds boys, said Rahal, referring to teammate Robert Doornbos’ dismal 23rd place finish as well as his own failure. Right from the start the race was bad because Will Power didnt try to stay in his lane on the start, continued Rahal. Youre supposed to be two wide and he wasnt. He came straight across and just took off my front wing. So right way we were fighting an uphill battle.

Danica Patrick’s 6th place finish was most surprising, given her weak performance during the practice and the qualifying rounds, in which she finished at the 18th place. This aroused suspicions that she was not physically strong enough to effectively maneuver around the bumpy confines of the Honda Indy racetrack.

Dario Franchiti leads the pack and would later finish the crash-ridden race first.
But today Patrick proved her critics wrong. Graham Rahal cited her maneuvers around the track as a hindrance to his racing. We had pretty good lap times but I just couldnt hang in there behind Danica. She would brake so early and I was bad at judging where she was going to hit the brakes because it was inconsistent, but it was always early and I ended up flat spotting my tires. But Patrick believed her impressive outing had nothing to do with trick maneuvering. “You definitely have to be aggressive on street courses, and today we were,” said Patrick. Aggressiveness can be risky, it seemed to pan off for Danica Patrick today. She must be hoping to build on her momentum into another street course at the Rexall Edmonton Indy on Sunday, July 26.

View the day’s photos here and the rest of The Mediums Honda Indy Toronto coverage here.