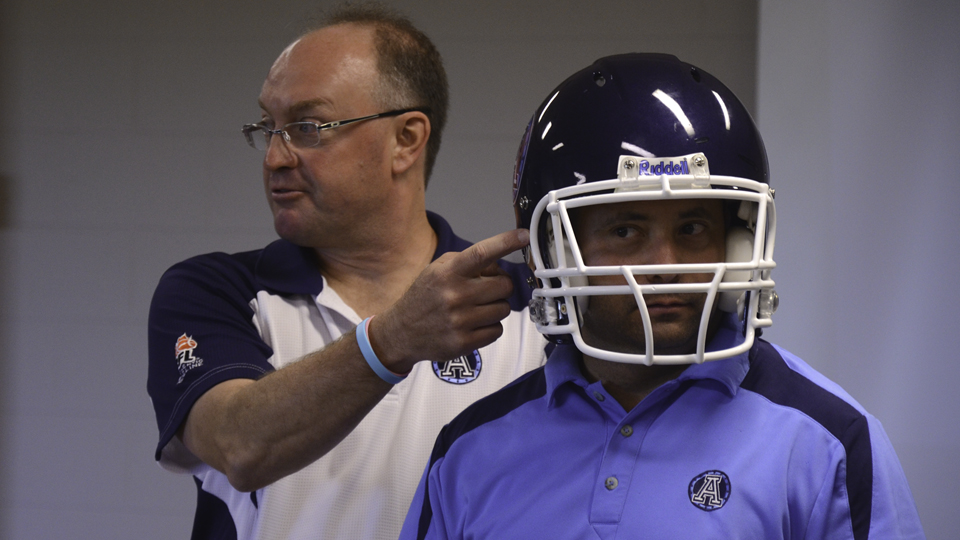 Sporting a thick silver mane, an intense glare, and an imposing all-black wardrobe on his six-foot-three, 250-pound frame, Toronto Argonauts general manager Jim Barker commands attention at the front of the room. “When I’m speaking, don’t be on your phones or texting. That’s going to piss me off,” he says. “Especially when the lives of our youth are in our hands.” The atmosphere levels out, opening up to Barker’s fiery hands-on workshop for the approximately 40 football coaches representing high schools within the Toronto District School Board. The Toronto Argonauts, partnering with Tim Hortons, took to the Faculty Club on the Davis Building’s third floor last Wednesday to host the Coaches’ Seminar on Player Safety. The seminar featured presentations by Danny Webb, the Argos’ equipment manager; Dave Wright, head athletics therapist; Jason Colero, director of education programs and of the Argos Foundation; and Barker. With the decline of extracurricular activities in elementary and postsecondary schools, having such a large turnout of coaches was  significant. Player safety is a hot topic in contact sports, especially in football, due to equipment issues and recent events in the news, such as the NFL’s New Orleans Saints’ bounty scandal. Having the high school coaches take lessons from members of the CFL franchise is meant to give early momentum to safe football practices. Barker’s intense presentation began with a breakdown of the history of football equipment and the importance of proper terminology. For instance, he urged coaches to use the word “rip” for a tackling motion rather than the commonly used “wrap”, as a safety precaution. With the help of a padded bed, he had a coach in the crowd take part in some physical examples of how to properly “rip” and how to coach players to lunge for a tackle. Webb discussed concussions, including signs, symptoms, management, rehabilitation, and parental guidelines for dealing with the injury. His presentation included a display of some new variations on helmets and shoulder pads, intended to better protect the players. He also introduced a new helmet that features modified clips for buckling the helmets, a measure in avoiding intentional harm. “You’ve heard the horror stories where kids take their helmets home and take the clips and sharpen them out,” said Webb. “So they’re looking to switch to plastic clips.” Having been involved with the team for 28 years from his start as the Argos’ ball boy to his current position as the director of education programs, Colero’s job is to speak to players, coaches, and parents daily on how to most efficiently play football. “It’s extremely important. Any time you do this, you’re simply reducing the risk of injury. You’re preventing and reducing the risk. You’re not actually saying you’re going to stop any injuries, but you’re reducing any risk,” he stresses. “And that’s done by preparing the coaches who prepare the kids.” Colero’s community involvement involves dealing with kids of all ages and sizes, including the constant need to correct bad habits. “You don’t want to scare them into it and say, ‘If you don’t do it right, you’re going to get hurt!’ But you do have to tell them that you want them to play the game for as long as possible, and the way to do it is to do it properly. In my time watching kids, they buy into [it],” he says. “They know they want to do it right and know they will excel by doing it right, and those are the kids that will stick around in this sport. The ones who give up on the instructions are the ones who don’t get far.” The seminar comes just five days after the death of Gene Odulio, a grade 12 student who played football at St. Thomas Aquinas Secondary School in Brampton. Odulio collapsed on the afternoon of Friday, September 7, during the fourth quarter of a home game, and died in Sunnybrook hospital two days later. Colero’s work with the schools and teens makes Odulio’s death hit close to home, but he calls for the public to focus on solutions in such delicate situations. “My heart goes out to the family. It is a sad situation. Not to sell it short, but the biggest thing is, there’s risks in everything we do. There’s risks in waking up in the morning to getting in your car and driving down the highway,” he says. “When these things happen, we as a community and as a group have to move on and then make ourselves more aware to reduce these things from happening. It is tragic, and when I see these things happen—when a life is lost—it’s sad, because we’re playing a game here, and it’s a great game.” Player safety in football still isn’t perfect, but by hosting seminars like this one, the Toronto Argonauts are doing their part for the future of the game and ensuring that players play right.