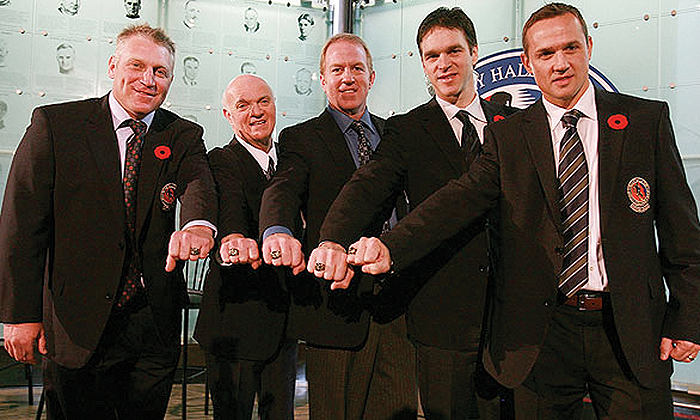 This past week in Toronto, the Hockey Hall of Fame inducted five new legends for their accomplishments on and off the ice. Brett Hull, Brian Leetch, Luc Robitaille, Lou Lamoriello and Steve Yzerman were thus honoured during the Maple Leaf game on Saturday November 7.

The Golden Brett, as Brett Hull quickly became named, scored 741 goals during his career, third only behind Wayne Gretzky and Gordie Howe.To those goals Hull added 650 assists, becoming the twenty-first overall point getter in the NHL. During his career, he played with four teams and won two Stanley Cups. No Stanley Cup was more memorable than his game-winning sixth goal against Buffalo in triple overtime to clinch the Cup. With 1391 career points, this sniper was a logical choice for the Hall.

Another logical choice was the first American born Most Valuable Player Brian Leetch. During his illustrious career, he amassed 247 goals and 1,028 points, which ranks him fifth among all defencemen. He broke into the league by storm in 1988 and won the Calder Trophy, which was awarded to the top rookie that year while also being selected to the NHL All-Rookie Team. He did not slow down as he was named the Conn Smythe trophy winner in 1994 when he led the Rangers to the Stanley Cup. Smooth skating and solid defence makes him comparable to Bobby Orr; and he will now share the Hall of Fame with him.

Among this draft class is the top-scoring left winger in NHL history, Luc Robitaille. Even though he was selected in the ninth round of the NHL draft, he became the nineteenth overall scorer in NHL history. His 1,394 career points is surpassed by no other left winger and Robitaille worked with four 100 point seasons during his nineteen-year career. He was never concerned with his individual attributes; he simply wanted to win the Stanley Cup. Robitaille joined the Detroit Red Wings in 2002 and played alongside Steve Yzerman. The team won the Cup that year. Robitaille was humble and talented throughout his career and was an obvious choice in this Hall of Fame class.

In the builder category, Lou Lamoriello was inducted for being responsible for the New Jersey Devils resurgence as a powerhouse in the NHL. Lamoriello built the Devils into a team that won three Stanley Cups in the span of eight seasons. Without a doubt, Lamoriello will be remembered as one of the greatest general managers to ever grace the league, and one who built a dynasty in the mid 90s.

One of the easiest players to induct into the Hall of Fame was Steve Yzerman. The face of the Detroit Red Wings for twenty-two seasons, Yzerman gathered 1745 points during his time there. He served as the captain of the team for nineteen seasons, the longest captaincy in any sport. Yzerman led the Wings to three Stanley Cup Championships including back-to-back in 1997 and 1998. He won the Conn Smythe during their Cup run in 1998 where he scored 24 points to be named the playoff MVP.

Yzerman is seen throughout the league as one of the greatest leaders. His leadership qualities were the main reson why he was named Executive Director of Hockey Canada. Yzerman will be looked upon to put together a team that will win gold in the 2010 Winter Olympics in Vancouver. His raw talent made him the most logical choice to be enshrined in the Hall of Fame.

The Hockey Hall of Fame 2009 draft class is one of the best to date and probably one of the easiest to select. The individuals inducted left their mark on the game and because of them, hockey will never be the same. These five individuals will be remembered as hockey legends on and off the ice.