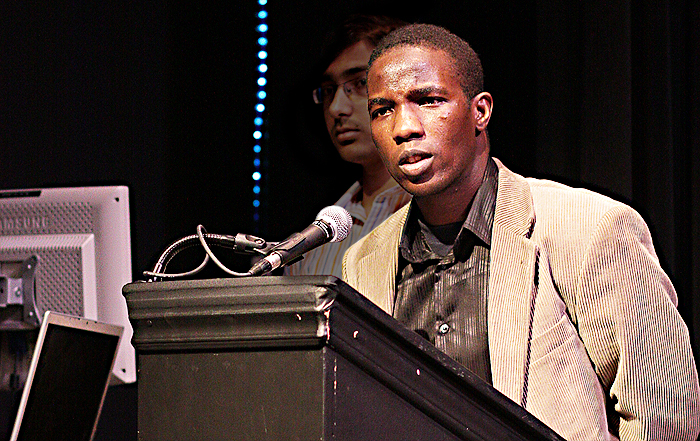 Last Thursday, UTMSU and the UTM Red Cross held a vigil to raise awareness and support for the earthquake that struck Haiti on January 12.
At the start of the vigil ceremony, UTM Red Cross president Zafir Yousef played a slideshow that demonstrated the devastation of
the quake. After the slide-show, UTMSU VP-External Henry Ssali said that he had no words to describe what happened in Haiti. Ssali thanked the UTM student groups and the Red Cross chairman Zafir Yousef for his continued support in the fundraising effort.

After Ssali, Red Cross chairman Zafir Yousef  addressed the student body and said that he is grateful to the UTM student body who provided a big response in putting together and helping raise funds for those in need. He thanked the UTM MSA, Christian Students Union , African Students Association and the UTM Womens Centre for their continued support throughout the Compassion for Haiti relief effort.
UTMSU president Joey Santiago also addressed the attendees.It has been a tragic week, and the story of Haiti is a story of survival, hope and despair, said Santiago. It is a realization that we are privileged at UTM.

The Haiti Coalition, formed by the Red Cross and UTMSU, received $16,000 in donations from the UTM community, a sum that  UTMSU will match.

Aside from student representatives, U of T Academic Dean Gage Averill also addressed those in attendance. Averill began his address by blowing a conch shell, a traditional symbol of Haiti. As an ethnomusicologist whose expertise is on the musical traditions of Haiti, Averill sang various Creole songs of healing, spiritual deities and elders that represented the Haitian people. According to Averill, the Haitians rich culture will give them power in this disaster, as per the Haitian proverb, with many hands no burden is never too great.

From his previous experience with travelling and living in Haiti, Averill said that the reconstruction efforts in Haiti are not only on the physical scale, but that the nation needed to the years of political instability, poverty, disease and social injustices that existed even before the earthquake. In the light of the circumstances, reconstruction efforts will take decades.

After the Deans speech, the charitable representative from the Red Cross Organization Toronto Head Office claimed a cheque of $15,000 from the UTM Red Cross society and other clubs who participated in the fundraising. The funds collected from the UTM community will be use for medicine supplies, sanitation and to help provide nutritional assistance for the people of Haiti. The Red Cross also awarded certificates of recognition and appreciation to certain highly devoted members of participating clubs.

Towards the end of the ceremony, UTM students lit candles and held a moment of silence to remember those who lost their lives in Haiti. After the moment of silence, various photographs of all the attendees was taken and the ceremony was declared over with the UTM Dean Averill stating that aside from the Red-Cross fundraising effort, a long-term fund for Haiti would be set up to help Haitians in the recovery years
following the disaster.