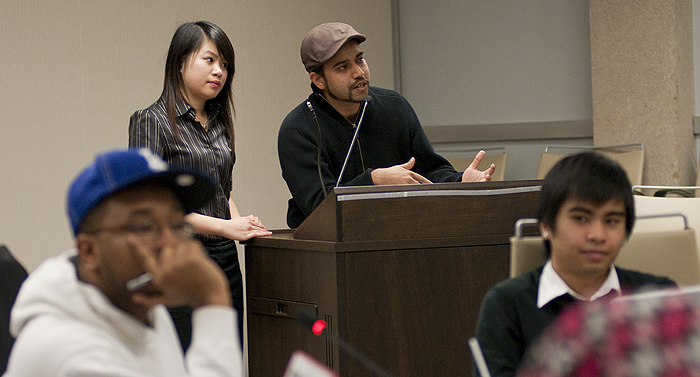 UTMSUs 2009 Annual General Meeting took place last Thursday afternoon in the Council Chambers in the South Building. Attended by approximately 50 students, the AGM saw no mention of the proxy collection process until it reached the other business point in the agenda. Associate to VP university affairs James Boutilier recommended that a review in proxy procedures be performed, stating that proxy forms have been abused too many times.

Boutilier referred to last weeks irregular management of proxies for the University of Toronto Students Union AGM. Instead of the usual hand-delivery, UTMs proxies were faxed to UTSU headquarters past the deadline. Before they were faxed, the unnumbered proxies were in the possession of a then unlisted UTMSU staff member, bypassing the normal collection process at the hands of UTMSU office administrator Linda Feener.
Following Boutiliers recommendation, UTMSU President Joey Santiago said that the policy committee will discuss this issue at their next meeting. Santiago assured Boutilier and those in attendance that students are aware of the issues pertaining to the AGM when they give their proxy to someone.
Feener signed out approximately 40 proxy forms for the UTMSU AGM. Not all were returned, but any student who attended without having signed out a proxy form was still entitled to one vote—their own. Moreover, students were asked to sign in and pick up a voting card before entering the meeting.

Recent UTMSU accomplishments highlighted at the meeting include closing down a dumpsite, regaining the 24/5 library service during exam periods, successes in achieving a discount for the TTC metro pass, the UTM book exchange, and a profit at the Blind Duck pub, said Santiago.
Among the Unions goals that were listed during the AGM are holding regular town hall meetings, working on a close relationship with the city of Mississauga and uniting students.

VP internal and services Carol Au Yeung continued the meeting with the presentation of the financial statement for the 2008-2009 academic year. The Blind Duck Pub has an increase of 45% in sales this year, said Yeung. Students unanimously  passed the audited financial accounts as well as the appointment of the current auditors.

The meeting also presented UTMSUs constitution and bylaw changes, which included an official change in the positions of the VP external and the VP equity. The VP external now takes charge of international student issues and the VP equity takes charge of social justice issues. The reason for the change, Santiago explained, is to be more cohesive with UTSUs executive positions.

Students in attendance were invited to ask any questions pertaining to any topics that were or had yet to be addressed. The president of the Mississauga Free Thought Association asked how long-term funding is approved for clubs at UTM.

We have over 70 clubs this year. All clubs never get 100% of what they ask for, said Santiago. The funding for clubs is bound by the policy manual and the allocation of funds for each club is available on the UTMSU website for public viewing.

Can we make it a rule that first year reps and ministers be trained? asked Sabiha Sumra, minister for education and outreach at UTM. The next policy meeting will address this issue.

Further questions addressed funding for clubs at UTM and all questions were received with an affirmation at making changes, such as having club funding information present as well as beginning club meetings.