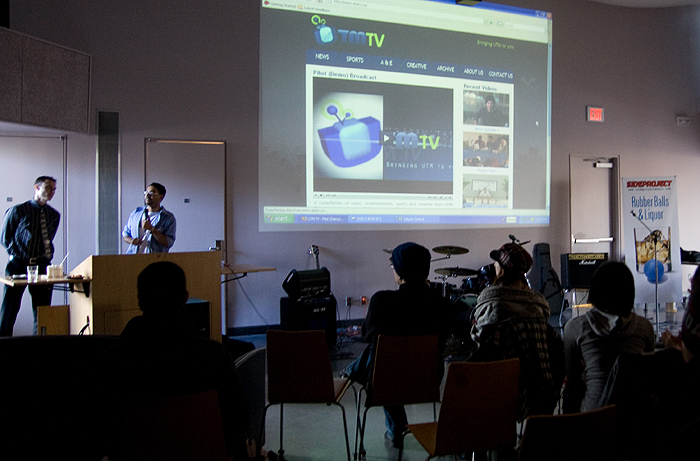 Last Thursday, UTM students were invited to the Student Centre presentation room for the launch of UTM TV. The project, which has been in the works since mid-October, was started by Andrew Hamilton-Smith, a third-year English and History major and former New Editor at The Medium. Hamilton-Smith said he came up with the idea for a campus-based television program from observing the underused television screens scattered around campus buildings.

The half-hour video premiere featured news, sports, arts and entertainment and creative sections, interspersed with promotional videos for on-campus groups like the UTM Hip-Hop Union, the UTM Debate Society and Bike Share. The 30-minute presentation was designed to be a sample of a regular UTM TV broadcast.

What started out as a project with only Hamilton-Smith as production director and Joel Fernandes as creative producer snowballed into a team of six production heads, with the additions of Jonathan Childs-Adams as post-production manager, Peter Buczkowski as news producer, Claire Morcos as arts & entertainment producer and Olivia DOrazio as the sports producer. From there, UTM TV blossomed, amassing technical staff, associate producers, art and tech supervisors, volunteers, a heavy helping of lucky breaks and overwhelming support from the campus-based Media Generator. The project now includes over 90 people contributing 150 man-hours towards the first of many productions.

UTM TV is one way for UTM to add its voice to the growing trend of independent productions around the world, At times I feel as if some sort of higher power is at work behind this project. The way everything came together is something that I cannot take complete credit for, said Hamilton-Smith. This experience has been almost spiritual at times with all the positive energy thats surrounded this concept from the beginning. This has come from volunteers, the school, our production heads, Media Generator. UTM TV has truly taken on a life of its own.
Joel Fernandes, UTM TVs second-in-command, described the idea of a campus TV show in his opening speech as a shot in the dark .

Im absolutely blown away by the progress weve been able to make in only three months, Fernandes said. Weve had an avalanche of support from nearly everyone weve approached. This journey has been a humbling experience and I would love to see Andrews legacy become as big as it can be. Theres a lot of potential in UTM TV to be tapped by various departments across the campus.

Maciej Derulski, UTM TVs web manager, said that UTM TV aims to have weekly updates via the website and also a longer monthly release. He has plans to turn the site into a social media site, not unlike YouTube, with member accounts and the option of uploading your own videos, which may end up on UTM TV broadcasts.

When asked about his experience in the process leading up to the launch, Derulski shared that he originally refused Fernandess offer to run the site.

Im a full time student, said Derulski. I couldnt afford to take on such a massive project. After sleeping on it briefly, I went back to Joel and said yes. Oddly enough, my grades are better than
ever.

Excitement rolled in waves as every member of the UTM TV production team sat in the back of the Blind Duck enjoying drinks after the official launch. Hamilton-Smith spoke of the changing face of media across the globe, and how that affects peoples expectations about the type, quality and mode of transmission of the information they want and need.

Despite all the excitement and positivity, the project has not been without set-backs. A major issue for the team has been a lack of space. UTM TV is still without an office and operates by commandeering the CCT3148 editing suite whenever they can. Another drawback has been the lack of experience of the team in general. However, Hamilton-Smith noted this was less of a drawback in the end, since creativity filled in the blanks for experience and afforded the team greater freedom in their creative process.

Students can expect to see UTM TV productions up on blank screens around campus soon. Some of the projects in the works include Zombie on Campus, a CSI style look into the Forensic Department at UTM, the UTM Comedy Show and many more. Hamilton-Smith even hinted at getting UTM TV on Rogers Cable 10.

For updates and for details of the official launch, visit www.utmtv.ca.