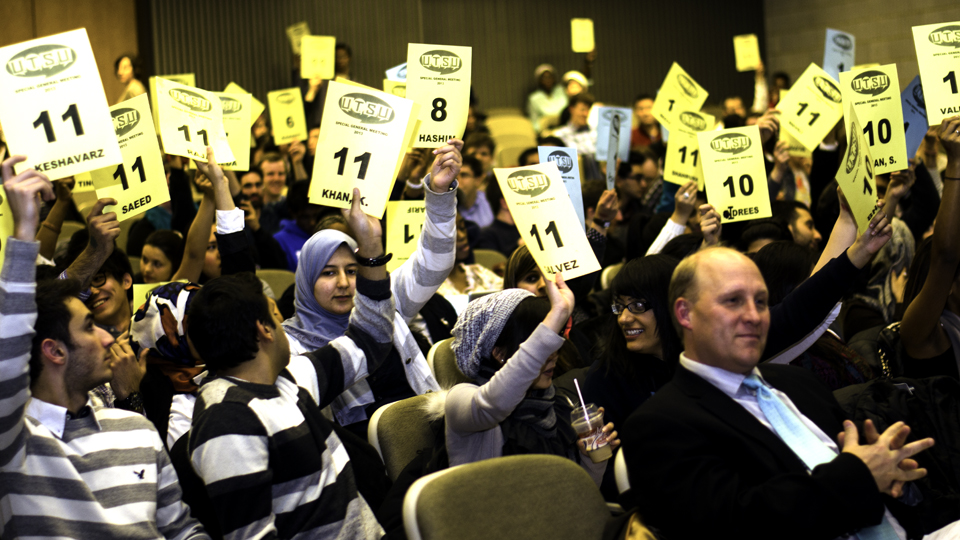 UTSU’s Special General Meeting, the replacement meeting scheduled after the agenda was voted down at the Annual General Meeting in November, adjourned unexpectedly last night before attendees could vote on electoral reform, an issue that has garnered controversy.

The meeting, which stretched to nearly four and a half hours, failed to reach quorum after a large number of UTM students left to catch their chartered bus at 10 p.m. Initially, UTM students were barred from leaving until they could vote against a motion that would have allowed for greater discussion on the issue of electoral reform. Once UTM students were permitted to leave, quorum dropped and the meeting was ruled out of order. As a result, the meeting would have to adjourn without voting on electoral reform.

Attempts to bring in more students to regain quorum during a 10-minute recess were unsuccessful. The meeting adjourned after Rishi Maharaj, president of the Engineering Society, moved for the meeting to reconvene next Tuesday at a location yet to be announced.

Members of the union voted to oppose unpaid internships, ban Styrofoam food containers from campuses, begin an anti-war coalition, condemn the website “A Voice For Men,” endorse the Idle No More movement, reduce the required nominations for UTSU executive candidacy, and lobby for changes to student representation on newly-formed campus councils. The motion to reduce the number of permitted proxies, a process that allows students to assign their vote to another student, did not pass.

Look out for more in-depth coverage on the UTSU SGM in Monday’s issue.