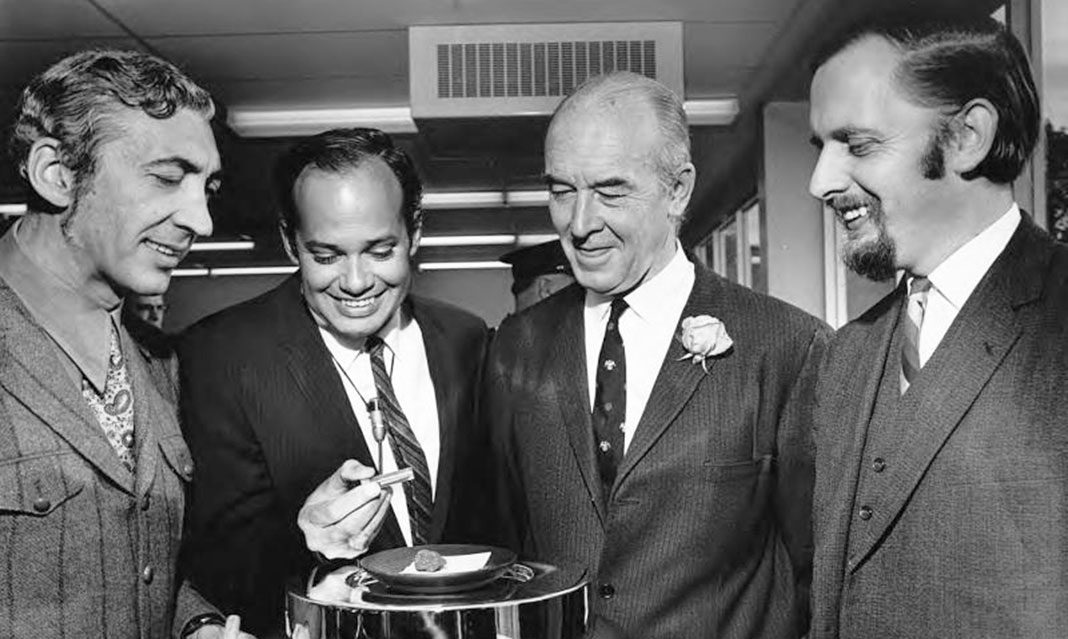 This week, U of T Mississauga students and faculty can reminisce on the 50th anniversary of Canada’s first public showing of Apollo 11 moon samples—a historic event hosted by UTM, then known as Erindale College, in 1969. Mark Overton, Dean of Student Affairs and Assistant Principal, told the story of how spectators gathered to catch a glimpse of the mysterious space artifacts on October 11 and 12 in 1969. When the first lunar samples arrived and were exhibited, “a line-up of 3,000 people came onto campus to peek at a golf ball-sized moonrock and a thimble of moondust, displayed in a custom-made glass orb,” said Overton. Overton terms the event UTM’s “quirky anniversary,” a date now memorialized in UTM’s Library Archives. The Library’s Archive and Special Collections showcases related campus history, such as scientific contributions to astronomical and geological research and notable achievements of UTM alumni. One such notable person in academic space and discovery was David Strangway, a U of T geophysicist and later U of T’s president. He worked for NASA in the mid-to-late 1960’s, during the agency’s famed manned trips to the moon. In 1970, Strangway was Chief of NASA’s Geophysics Branch and was responsible for the geophysical aspects of the Apollo missions. As the chief scientist of the geophysics branch at the NASA Johnson Space Center, and professor of geophysics at Erindale College, Strangway trained renowned astronauts Armstrong Edwin Aldrin and Michael Collins on collecting moon samples from the lunar surface. Following their famous moon landing, Strangway became instrumental in bringing some of those moon rocks and moon dust to Canada for research and public display.

In a 1994 Toronto Star interview, Strangway looked back on the experience, saying, “It
was tremendously exciting to realize that the whole world was sitting rooted on this particular event,” said Strangway, “and that before very long, I was actually going to have a piece of that stuff sitting right there; being able to measure something I’d always dreamed about being able to measure.”

In 1972, Strangway was awarded the NASA Exceptional Scientific Achievement Medal
for his scientific contribution to NASA. The 50th public showing anniversary arrives on the heels of Canada’s Science Literacy Week from September 16 to 22. The week-long annual celebration highlighted science-based activities by outstanding scientists and science communicators across the country. UTM’s own dedication to Science Literacy week also saw a range of educational displays and exhibits showcasing meteorites, demos and replica technologies, each under the themes of Science and Discovery. Overton tells students that “the UTM library also created the Moon Rock Visit Anniversary webpage in its virtual exhibition as part of U of T’s larger Science Literacy Week.” The Space and Discovery online exhibit houses UTM’s contributions to astronomical and geological research.

This first public showing of the moon samples occurred in the North Building of Erindale
College. The samples were then moved to the Physical Properties Laboratory, now the
Paleomagnetism Lab on Principal’s Road, for geological research.
UTM faculty attempted to find the glass orb custom-made by Birks Jewelers to display at
UTM’s Science Literacy Week events but were unable to locate it.
Instead, students can visit the Crescent Moon Light that still stands at the
Paleomagnetism Lab as a commemoration of the Apollo 11 moon samples studied at UTM.