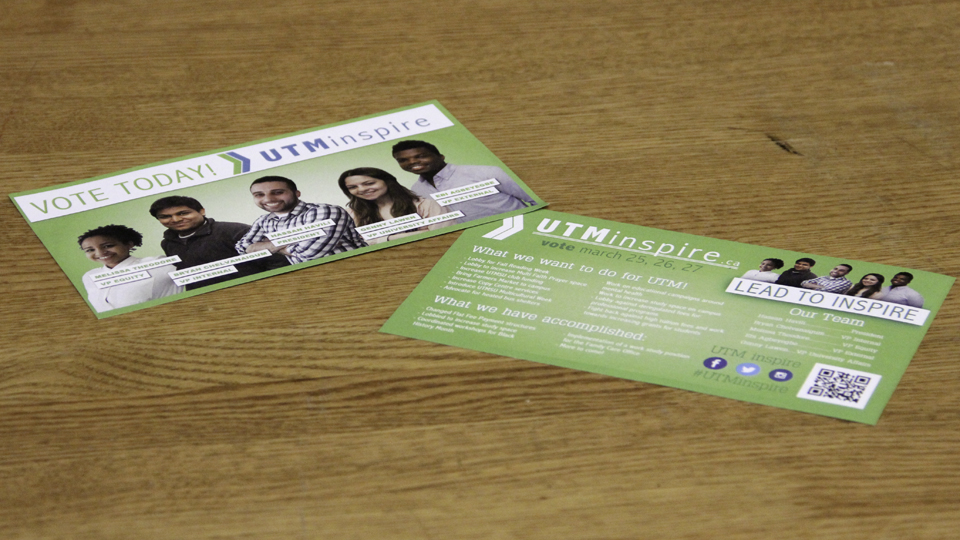 The unofficial results show a sweeping victory for UTM Inspire after the poll clerks finished counting ballots late on Saturday.

The unopposed slate candidates took all positions by a wide margin, all by a difference of about 1,400 votes between for and against. The contested position of VP internal was won by the slate’s Bryan Chelvanaigum over independent Erik Hernandez-Oberding, 1,413 to 461. The contested position of VP equity was much more narrowly won by the slate’s Melissa Theodore over independent Farishta Amanullah, 1,068 to 848.

Independent candidate Amir Moazzami claimed the position of VP part-time affairs, for which there was no slate candidate, in an election of only 38 counted ballots—with 28 in favour.

Abstentions and spoiled ballots numbered between 100 and 200 each for all positions except VP part-time, for which there were 6.

The candidate statements of all unopposed candidate were posted inside at least some of the voting booths, including in Davis. The Elections Procedure Code is vague on the matter, forbidding “candidates” and “campaign posters” at polling stations but not explicitly “campaign material”.

Current UTMSU president Raymond Noronha condemned the placement of these statements at polling stations in a phone call with the Medium last Friday.

Theodore wrote on Facebook shortly after the results were released: “I’ve never really fought for anything in my life. I always said that I would stand up for what I believed in. During this election period, this is exactly what I did.”

Before the results were posted, Farishta Amanullah, a candidate for VP equity, posted about her experience running as an independent.

“To be honest, it wasn’t easy,” she wrote, noting that she experienced antagonism during the campaign.

Amanullah reiterated that she wasn’t running against the Inspire slate, and complained that on the final day of campaigning, slate candidates were trying to prevent students from talking to her.

At Monday’s debate, Amanullah and Theodore often faced off when defending their platforms.

Amanullah says some candidates focused on complaining about their opponents in attempts to get them demerit points or disqualifications.

She spoke of her failure to put “Please pass on to a friend or recycle” on her “Wall of Change” banner. Within 10 minutes of posting the banner, CRO Abdul Kamali phoned her saying someone had complained. Amanullah wrote the statement in pen, but after several hours received an email notifying her that she had received eight demerit points.

“I focused on my campaign, not [trying] to get others in trouble,” she said.

All of the slate’s candidates only included half of that required phrase on their posters, potentially in violation of the EPC, but received no demerit points.

Maaham Malik, elected as a director for Division III, was nearly disqualified last week before appealing the decision. According to the “Wall of Transparency”, the elections notice board posted on the outer wall of the UTMSU office, the Elections and Referenda Committee granted the appeal, instead assigning her 20 demerit points for “unapproved material” and for breaching “generally accepted community standards”.

Malik refused to provide further comment on her case.

By a much closer vote, the candidates elected for Division III central directors at large are, in addition to Maaham Malik, Frishta Bastan, Naveed Ahmed, Nirmal Patel, Belal Raifai, Ridwan Olow, and Ming (Patrick) Zang. The difference between Zang and the unelected Emerson Peter Calcada was a mere 16 votes.

The results are not considered official until they’re ratified by the Elections and Referenda Committee, which is expected today.

Noronha told the Medium on Friday that he recommends implementing an online notice board for next year’s elections.

He also spoke of the possibility of online voting, which he hopes will be implemented before the union is forced to do so, as UTSU was this year.