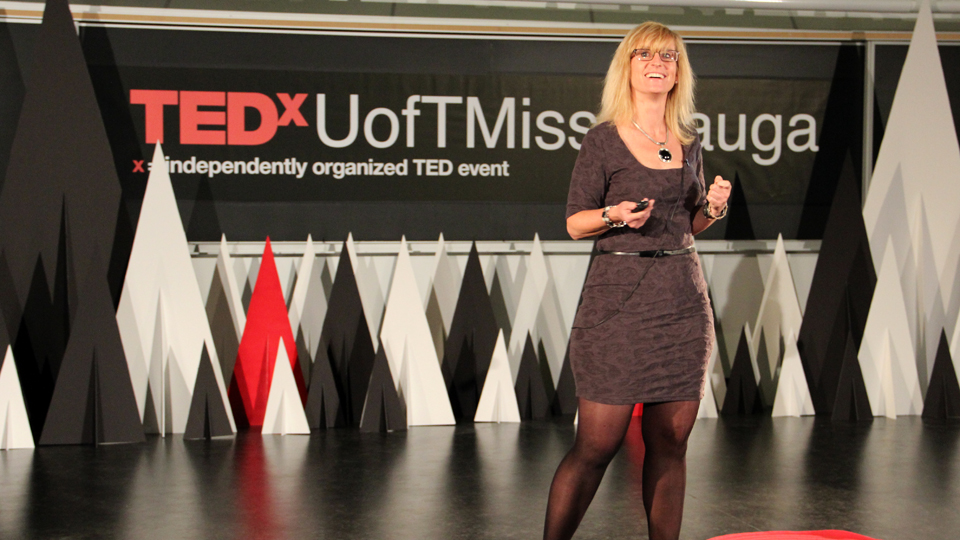 The first TEDx talk at UTM saw speakers deliver presentations on the themes of “Are We, as a Human Race, Happy?”, “To Boldly Go”, and “Learning from Our Teachers” last Saturday.

Attendees were required to complete an application process in advance in order to hear the 10 speakers, including three UTM lecturers.

Some 100 attendees had coffee, took photos, and mingled in the decorated atrium of IB until they were ushered in at 11 a.m. for an opening address by the co-chairs, UTM students Sarah Israr and Sarah Adnan, and by Prof. Hugh Gunz, the inaugural director of the new Institute for Management and Innovation. The conference was sponsored by IMI, CCIT, the Office of the Dean, and the Office of Student Life.

Cawthra Park Secondary School’s dance ensemble opened with a performance to a Beatles medley. The evening also included a performance by guitarist Jesse Alarcon and a dance by the Erindale Campus African Students’ Association.

The speakers on the first theme discussed positive thinking, altruistic “third-gear” thinking, and the dangers of widespread “entitlementality”.

The “To Boldly Go” theme included a husband and wife who described stepping outside of one’s comfort zone, an entrepreneur who spoke about having passion for one’s goals, and an entertainment company president who said that it’s essential to “manufacture an obsession for your passion”.

After a break, Prof. Monika Havelka led the “Learning from Our Teachers” segment with a presentation on overcoming fear by building trusting relationships and embracing failure. Prof. Marc Dryer of UTM’s biomedical communications program spoke about bringing arts and science together, and Prof. Rhonda McEwen shared childhood stories and the life lessons she’s learned from her own teachers.

“The greatest thing about being a human is the never-ending capacity to learn,” said McEwen.

“The speakers were all remarkable storytellers,” said Dominik Nowak, a UTM alumnus and first-year medical student at McMaster, after the show.

The show was streamed live on the TEDxUTM website, and gift baskets were given to the attendee who tweeted the most and the one whose tweet was the most inspiring.

Adnan described how TEDx came to UTM in an email interview. Israr, the vice-president of the Student Management Association, proposed the event. “When we went on to apply for the license of TEDx, they declined, saying that the only way we could be granted the licence is if we collaborated with a large institution such as the university as opposed to a student-run academic society,” said Adnan.

They connected with Mark Overton, the dean of student affairs, who referred them to the Office of Student Life, which then became the official UTM liaison with Kate McGartland-Kinsella, UTM’s student development officer for leadership and learning, ai ding the two students in their efforts.

Adnan and Israr were given a 150-page manual for the event. “Since TED is a powerful, globally recognized brand, we had to make sure that we followed every single rule that came with the licence,” said Adnan.

“We’ve been talking about doing this for so long, so it’s great to see it come to fruition,” said McGartland-Kinsella. “The amount of work that has gone into this has been phenomenal.”

She said UTM is very likely to host a TEDx event again in the future.

TED is a non-profit organization founded in 1987. Its TEDx division licences organizations around the world to organize TED-style events in their own communities.