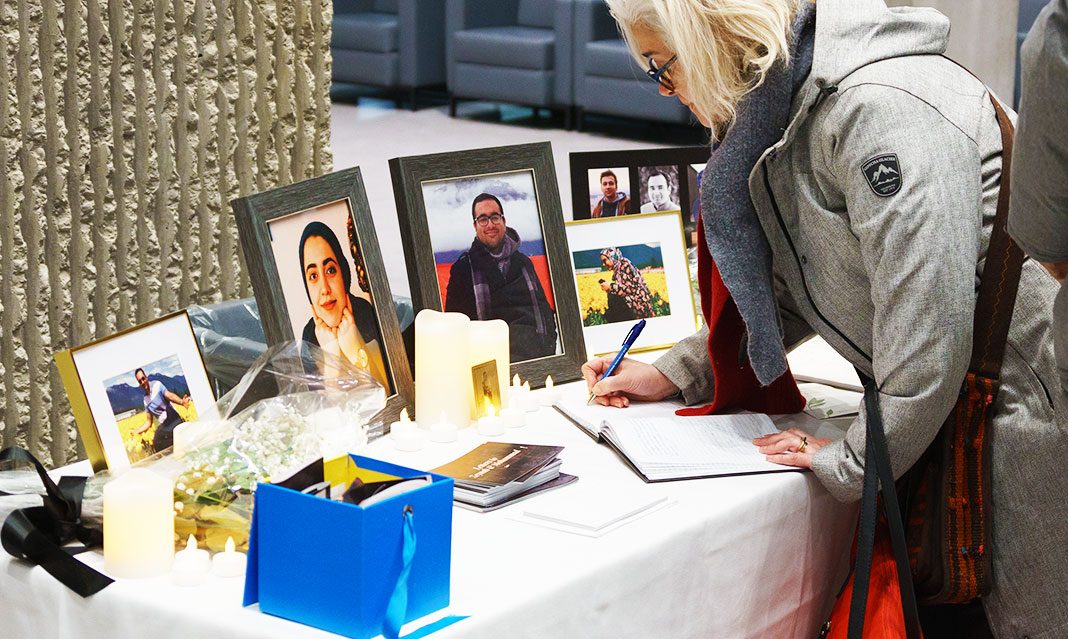 Operated by Ukrainian International Airlines, flight PS752 was struck down by an Iranian missile shortly after take-off on January 8. The crash took the lives of all 176 passengers on board, including 57 Canadians.

Originally, officials had stated that 63 Canadians had died in the crash, but that number has dropped to 57 according to Canada’s Foreign Affairs Minister, Francois-Philippe Champagne, during a press conference on January 10.

Among the 176 passengers were eight members of the University of Toronto (U of T) community, including six U of T students.

A prayer and memorial service for those killed in the crash, including UTM student Zeynab Asadi Lari and her brother Mohammed Asadi Lari, was held from 5:00 p.m. to 7:00 p.m. in the atrium of Maanjiwe Nendamowinan (MN).

Dozens of students and staff quietly gathered in the atrium, where pictures of Zeynab and Mohammed Asadi Lari were set on a table alongside a memorial book available for people to sign throughout the service in the front.

The service began with an evening prayer led by Imam Dr. Mustafa Khattab, the Faith Leader for the UTM Muslim Students Association.

After words of welcome and the land acknowledgement were said, friends, faculty and staff paid their tributes.

Seyed Mohammed Ebrahim Naghavi, a biotechnology specialist, a  was friends with Mohammad Asadi Lari since Grade 5.

“He was energetic, ambitious, and helpful to others. Since the first day I met him, he always studied hard and encouraged others to form study groups,” said Naghavi. “He would find individuals who were not good at a particular course and spend hours helping them.”

“My world will not be the same without him,” added Naghavi.

Anahita Bahreini–Esfahani, a fourth-year student studying neuroscience and one of Zeynab’s closest friend, described Zeynab as “one of the easiest people to talk to.” She met Zeynab at the Health and Counselling Centre at UTM while volunteering as a wellness ambassador.

“I am a really private person but the first conversation I had with Zeynab, somehow I ended up talking about my childhood, high school, just everything,” said Bahreini–Esfahani with a smile on her face.

Another one of Zeynab’s closest friends, Fatima Sahibzada, also spoke at the service.

“We shared everything together. Together was her key word. She wanted to take classes together. Hang out together. Study together,” said Sahibzada. “In our group of friends, she was the part that kept us bound.”

“Nothing is going to be the same without her,” added Sahibzada.

Habon Ali, the UTMSU’s VP Equity and a fifth-year student studying biology and environmental science, knew both Zeynab and her brother Mohammed.

“I was introduced to Zeynab by Mohammed. I met Mohammed in the summer [of] 2018. We were working together on youth policy and he was exceptionally bright and humble,” said Ali.

When asked what made the siblings special and different than others, Ali emphasized the words humanity, compassion, and kindness.

“Every action they took, their community initiatives, their work, their interaction with people and individuals, it was always personal,” said Ali.

“They [Zeynab and Mohammed] wanted to create change to have a better world,” added Ali.

Aman Arif, a first-year psychology student, said that adapting to the university lifestyle was made a lot easier with Zeynab by her side.

“Zeynab was one of my very, very close friends,” said Arif. “She was the first one I made at school.”

Jade Atallah, an assistant biology professor at UTM, remembers Zeynab with having eyes that were “always radiating with excitement.”

Atallah described Zeynab as an “active student leader” who had a clear understanding of what it took to succeed as a science student.

“She would come up to me before class. She used to rub her hands together when talking to me. I used to worry that she was nervous. I quickly learned she was just excited,” said Atallah.

“All I could think of is Zeynab—I am so sorry. Whatever factors, direct or indirect, local or international, intentional or not, that led to this, these are not the ideals that you and your classmates work for. These are not your standards. You deserve better,” continued Atallah.

“All we can do is promise ourselves that we will do better than what was done to you. We need to be better,” added Atallah. “We need to aim as high as you did.”

After a few words from Mark Overton, UTM’s dean of Student Affairs, the service concluded with a moment of silence, followed by closing words.

Last Wednesday, universities across Canada including U of T took part in a national moment of silence at 1:00 p.m. to honour the victims of the crash. UTM students and staff observed a moment of silence in the library during that time.

U of T also announced on Wednesday that it had created an Iranian Memorial Scholarship Fund to honour the lives lost in the crash. The fund will provide international undergraduate and graduate students from Iran studying Iranian studies with scholarships, allowing them to pursue their careers in Iranian Studies.