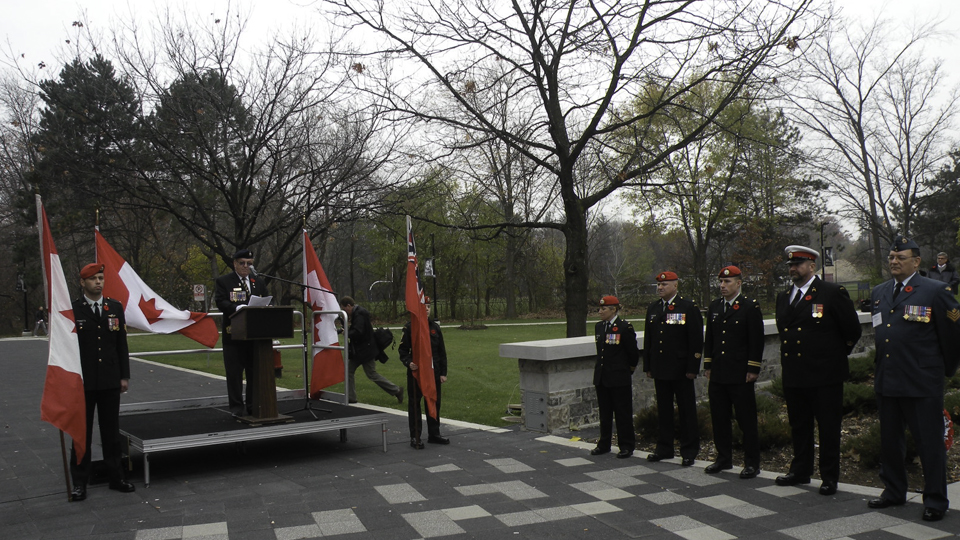 A cloudy, chilly Friday morning loomed over the plaza between the Instructional Centre and the  library as UTM staff and students, Peel police officers, Canadian army cadets, and, most importantly, veterans of the Canadian Armed Forces gathered to remember and honour those who have died in the line of duty for their country. All had bright red poppies pinned on their winter coats or uniforms.

Jack Porter, a member of the Royal Canadian Legion (Branch 139 of Streetsville), opened the ceremony by commemorating the sacrifices of all members of the armed forces who served their country with distinction  and with their lives. He pointed out that every one of those who died was a grandfather, father, uncle, brother, or a son.

Yasmine Youseef of the UTM Students’ Union read out “In Flanders Fields”, written by a Canadian soldier in World War I.

The sound of a trumpet filled the air as the Canadian and provincial flags were lowered, signalling the “Last Post”, a bugle call used mainly in military funerals in the Commonwealth, representing an end to a soldier’s duty. It signifies that they can now rest in peace.

Professor Scott Munro of the geography department played the “Lament” on bagpipes as floral wreaths were placed on stands. This was followed by two minutes of silence, the “Reveille”, and the raising of the flags.