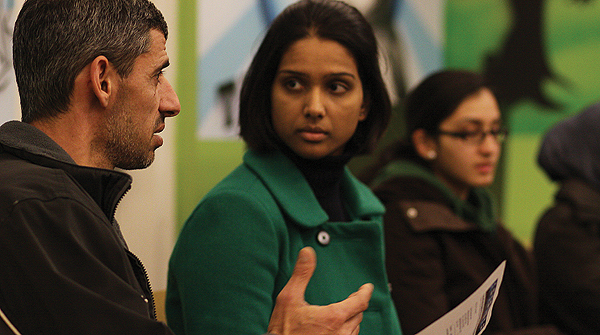 On January 6, two dozen students, community activists and concerned citizens gathered at the UTM Student Centre to help organize a campaign that aimed to ensure Parliament resumes on January 25.

Our troops in Afghanistan dont get to take a couple of months off. Canadas workers dont either. Why does Harper feel he can? said UTM student Walied Khogali, chair of the meeting and one of the organizers of the campaign.

During the meeting, the Mississauga organizing committee agreed to send a letter to Progressive Conservative MP Bob Dechert asking him to join other MPs when they go back to work on January 25. (Dechert is the only Conservative MP in Mississauga).

Moreover, a delegation will collect petitions asking MPs to resume their duties and will drop off the petitions at Decherts office on Monday. The committee plans to hold a rally on Saturday, January 23 at 1270 Central Parkway West, where Dechert will address his constituents.

The meetings and rallies were brought about by Stephen Harpers proroguement of parliament, which he requested of the Governor General on December 30. The parliament will thus be closed until March 3. This was the second time the Prime Minister prorogued the parliament in a year.

According to the Conservative government, the Prime Ministers goal was to have time to consult with Canadians, stakeholders and businesses as the government moved into the next phase of its economic action plan amid signs of economic recovery.

Many Canadians are skeptical. Critics accuse Harper of proroguing parliament to avoid being questioned by the House about the governments apparent complicity in the torture of Afghan detainees. Indeed, with the House on leave, all motions and orders, including parliamentary committees, are dissolved.

A Facebook group, Canadians against Proroguing Parliament, was started by a student from the University of Alberta and quickly gained nearly 135,000 members. Other splinter groups have also started up, with chapters currently for Mississauga and Toronto working on plans for upcoming rallies and demonstrations to demand the government to designate January 25 as the scheduled day to return to work following the holiday break.

For anyone who would like to be involved with the Mississauga and Toronto rallies, they can contact organizing members at
citizensfordemocracy.ca