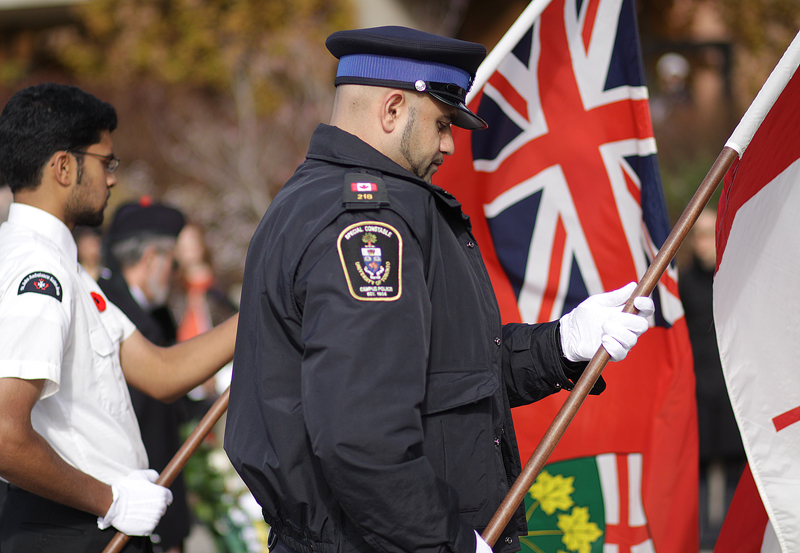 Hundreds of faculty, staff, and students sporting poppies on jackets, coats, and bags gathered outside the William G. Davis building on November 11 to commemorate the lives lost during the Korean War and the First and Second World Wars.

“Today we remember those brave men and women [who lost their lives in World War I],” said Len Paris, Police Services Manager, who began the call to order. “We remember why we must work for peace every day.”

The usually bustling entrance to the Davis building was silenced throughout the ceremony even with the crowd of people.

“We are gathered here on the eleventh day of the eleventh month at the eleventh hour for those who sacrificed their lives for our freedom and democracy,” said Saini.

Saini spoke about the ultimate actions of freedom of expression, including examples of people speaking out in Iraq and the election of candidates to the Canadian government.

“Think about how many countries don’t have the amount of freedom that we take for granted,” said Saini. “They [in WWI] volunteered to fight for freedom. They laid down their lives for peace. There are brave men and women risking their lives in the most dangerous places of the world. Let us not forget them, even for a minute.”

The first Remembrance Day was held on Monday, November 11, 1918, at 11 a.m.—the eleventh day of the eleventh month, at the eleventh hour. Originally called Armistice Day, November 11 commemorated the end of the First World War, at the time called “the war to end all wars”.

From 1923 to 1931, Armistice Day was held on the Monday that fell on the week of November 11 until MP Allan Neill introduced a bill to hold the Armistice Day on a fixed date and rename it “Remembrance Day”.

Bhatt was called to read Lieutenant-Colonel John McCrae’s poem “In Flanders Fields”. McCrae, who graduated from the University of Toronto in 1894 and later received a bachelor of medicine degree from U of T in 1898, fought in World War I but did not live to see its end. McCrae died in Base Hospital in 1918, only months before the war’s end.

“In Flanders Fields” was first published in England’s Punch magazine in December 1915 and quickly became a symbol of the sacrifices made by the men and women fighting the war. The poem continues to be read at Remembrance Day ceremonies every year. The poem’s popularity sparked the use of the poppy as a symbol of remembrance.

Saini and Sajjad laid wreaths with the word “remember” written across white ribbons, around the podium set up across from the entrance to the Davis Building.

Traffic was stopped on the Inner Circle Road for the duration of the two minutes of silence.

The flag was then raised to full-mast to the sound of “Reveille” playing over the speakers.

Len Paris wrapped up the ceremony and invited those in attendance to reflect on the day’s events over refreshments served in the Meeting Place, outside the former Campus Police office.