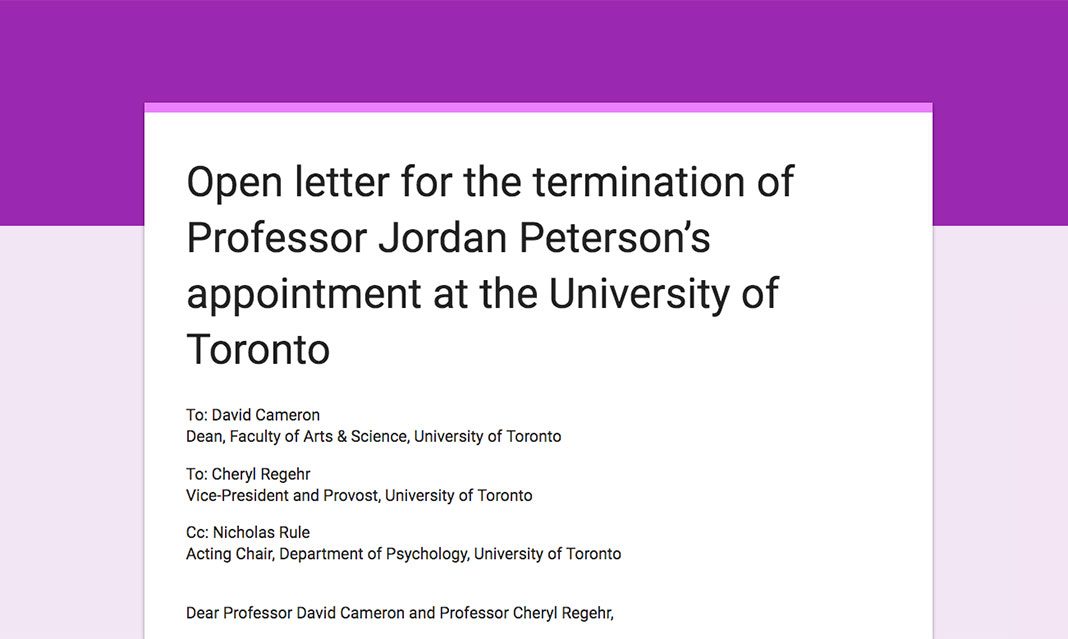 An open letter, signed by over one hundred university students, student unions, and organizations across Canada was sent to the University of Toronto administration calling for the termination of Professor Jordan Peterson.

The open letter comes after news of Peterson’s intent to launch a controversial site aimed to target courses in the humanities and women and gender studies.

Faculty from the Women and Gender Studies Institute have previously approached the university as well to intervene after the site was brought to their attention.

“It is the purpose of this open letter to call on the University to take appropriate and commensurate action. With the aim of supporting and protecting all individuals who are directly and indirectly harmed by Prof. Peterson’s behaviour, we, the undersigned, herewith request the immediate dismissal of Prof. Peterson.”

The letter alleges that Peterson is in violation of the university’s Code of Behaviour on Academic Matters citing that he is attempting to “disadvantage others by disruptive behaviour is unacceptable.”

“However, the mere fact that such an aggressive and damaging initiative was proposed by a tenured University of Toronto professor is unacceptable. Prof. Peterson’s intended project would specifically target the academic integrity of and student enrolment in Women and Gender Studies, “racial and ethnic groups studies,”[4] and the humanities in its broadest sense, contravening the University’s Code of Behaviour on Academic Matters, which states the University’s responsibility to ensure that “malevolent or even mischievous disruption”[5] is not permitted to threaten the educational process,” the letter reads.

This article is still developing; more updates to follow.