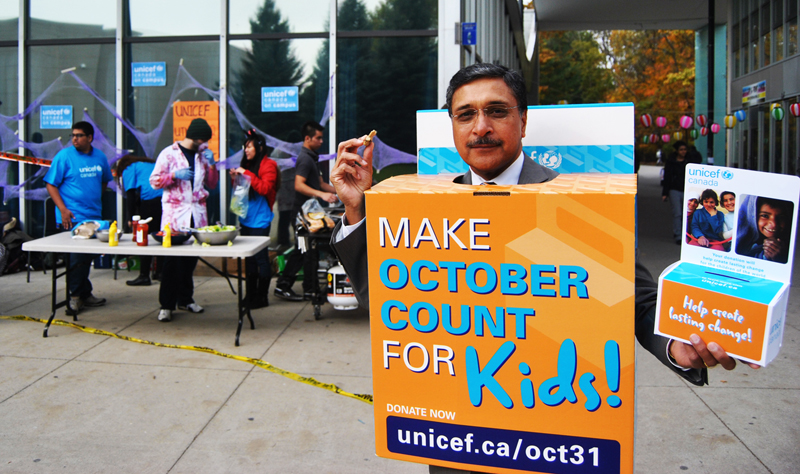 In celebration of National UNICEF Day, UNICEF@UTM organized a Halloween-themed fundraising event on Monday afternoon outside the Student Centre with their special guest, UTM principal Deep Saini, dressed as a life-size donation box.

“The students asked if I would get involved, and it’s a great, wonderful cause on UNICEF Day, helping children across the world,” Saini said. “I happen to know from a very personal experience how education can transform your life, how it can lift you out of poverty and marginalization into prominence. It can completely change—not only your personal life—it can change families and communities.”

About 10 volunteers and several members of the UTMSU Executive Board sported blue t-shirts as they spread awareness of the plight of non-first-world children who can’t attend school.

“We’re UNICEF@UTM, on behalf of UNICEF, and this is our first year on campus,” explained Alicia Pompey, the event organizer. “It’s called ‘Make October Count for Kids’, and we’re raising money for education because we want to lessen illiteracy in the world. I think it would be great to give someone else a chance and we thought it would be the perfect time to raise money to tie it in with Halloween.”

Amid the ghoulish decorations, posters, camera crews, and boombox pumping out loud contemporary pop music, the main event was coordinated into three main staging areas in front of the Blind Duck pub: a barbecue serving up $2 entrées of pork and chicken, a station for henna tattooing, and a table where bundles of candy were sold.

Volunteers posed with students in photo-ops and informed them of some of the success UNICEF Canada has had so far, including rebuilding an elementary school in Haiti that had been destroyed by an earthquake.

“We’re aiming for $500 because this is just a small-scale event, but we think the barbecue will be selling well,” Pompey said.

The goal of this and similar UNICEF drives across Canada is to send five million children in the developing world to school by the year’s end.