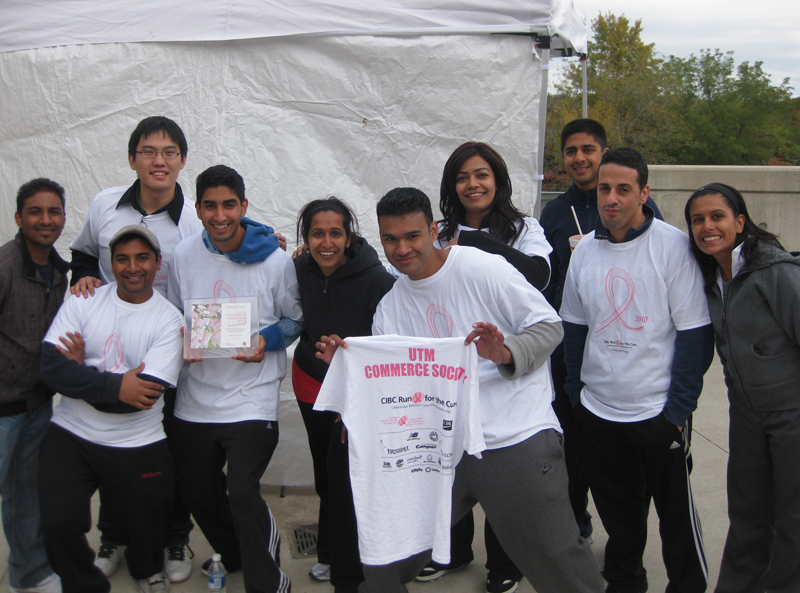 It was early in the morning, but spirits were high as participants assisted each other in securing their run sheets to the backs of their t-shirts. Each was dedicated to a loved one that had suffered from or was still struggling with the disease.

Spigel Hall was packed with volunteers and runners, all eager to start the run. Young children wearing white t-shirts swept the floor as they skipped around their parents. A cluster of elderly women sported pink fuzzy cowboy hats. Others wore pink tutus, war paint, and bandanas, boldly showing their support for the cause.

The University of Toronto raised over $80,000, taking the top spot as the number one fundraising university.

UTM’s very own Undergraduate Commerce Society ranked fifth amongst university teams, having raised over $7,800. Sunil Shah, the team leader and in charge of accounting, began the team in July with an initial goal of $1,500. The team quickly expanded from 10 to 50 members as UCS surpassed their goal. UCS welcomed all students, friends, and family to join their team.

“Cancer affects us all. It is up to us to create hope, and as long as cancer takes lives we must continue the fight to find a cure,” Shah said after the race. “I thought our goal would not be achieved, so our team stepped up and not only met the goal, but surpassed it.” At the awards ceremony at the end of the run, UCS received the School Team Challenge Award for raising the most donations at the UTM run site. Over 150 teams participated.

“It was inspiring to run with people who have been affected by the disease,” said Farhan Lodhi, a fourth-year commerce student. “Everyone did their part for the team and it made a huge difference.”

Throughout the five kilometre trek, people walked, jogged, and skipped along Mississauga Road and the surrounding area. Equipped with water, iPods, baby strollers, and dogs, the participants laughed, conversed, and reflected quietly.

“It was my first time doing the run and I was touched by the amazing turnout,” said Nicole Ferreira, a third-year biology student who attended the run as a member of the UTM Women’s Centre. “It felt good to finish the run and be part of such a powerful event. I definitely want to run again next year.”

In total, the nationwide event raised a record-breaking $33 million, which is a 25% increase from last year.