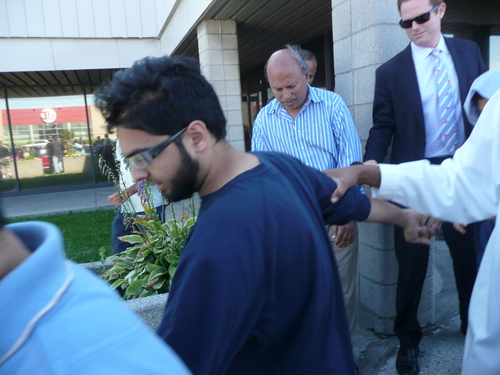 A University of Toronto student who stands accused of faking his own abduction now faces three charges against him after being arrested again for theft from his former employer in 2008.

Furqan Muhammed-Haroon, 22, was initially charged for stealing a recycling bin full of computer equipment from IBM on August 13.
On August 22, a search was put out for University of Toronto student after a friend of his called 911. The friend claimed that Muhammed-Haroon called him while driving and said he was being chased by three black men, one of which was carrying a gun. Police found his car in the Midwest Road-Midland Avenue area shortly thereafter with the keys still in the ignition. A three-day search ensued, with hundreds of people showing their encouragement for his family, which was in the United Arab Emirates at the time. When they returned to Canada, they ­­pleaded with the supposed kidnappers to return their son. Supporters created a Facebook group in which hundreds posted their prayers and well wishes.

After reviewing security tapes and speaking to witnesses, the police were not able to find sufficient evidence that Furqan Muhammad-Haroon had been kidnapped. Subsequent enquiries revealed that the student had been recently fired from a summer internship with IBM Canada after security tapes showed him carrying a recycling bin filled with computer equipment on August. 7.

On August 25, Niagara Regional Police located Muhammad-Haroon near a mosque in St. Catharines after receiving an anonymous tip. He was arrested and charged with public mischief. He was scheduled to leave the country on the day of his supposed abduction, despite a prohibition that bans individuals facing criminal charges from travelling. After being released on a $20,000 bail shortly after, Muhammed-Haroon, formerly with the University of Toronto Student Union, was arrested again on charges by his former employer for with theft in 2008.

The public outpouring of support and prayer soon turned into a mixed bag of anger and relief.  Some posted on Facebook that they were glad Muhammed-Haroon was safe regardless of the situation. Others were outraged.

Muhammed-Haroon is scheduled to appear in court on September 29. He may also be held responsible for resources and manpower used in the investigation of his fake abduction. If convicted, Muhammed-Haroons sentence could carry a maximum penalty of five years in jail.