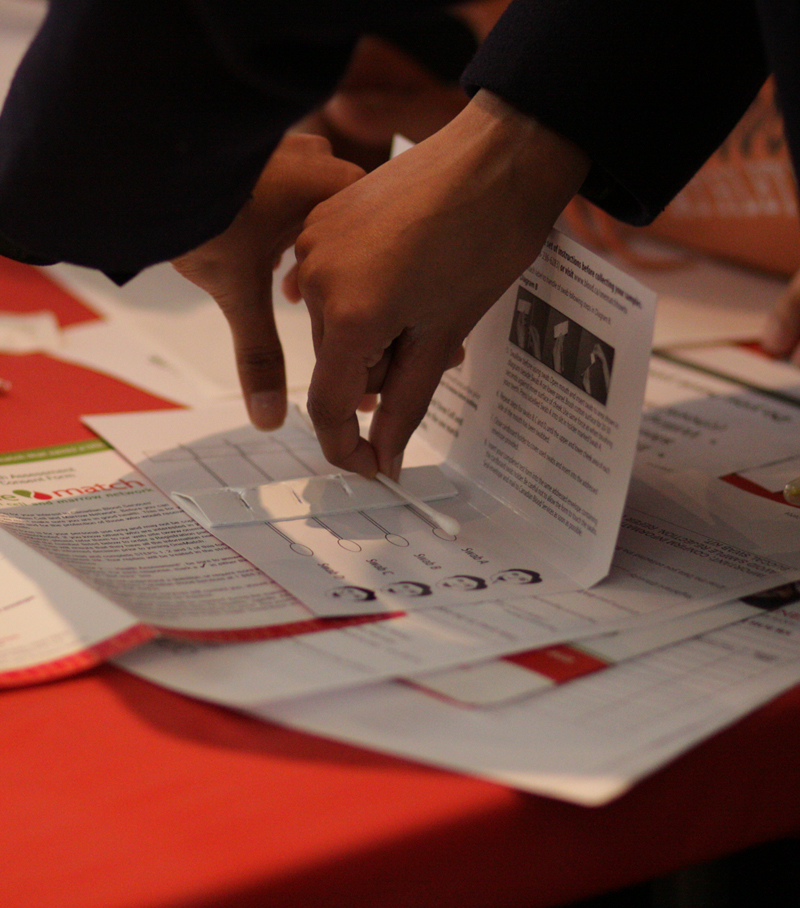 OneMatch, the stem cell and marrow network which is a division of Canadian Blood Services, visited the UTM campus on November 1. They set up tables in the Student Centre between 8 a.m. and 10 p.m. Students got swabbed in order to later donate stem cells. The swabs were then transferred to CBS for testing to ensure that the students were good candidates.

“This is the first time we’re here at UTM. We’re hoping to get at least 400 or 500 possible candidates swabbed today,” said Lilet Raffinan, coordinator and donor manager of OneMatch.

“UTM took part in a country-wide ‘University Stem Challenge’ and signed up 174 new OneMatch registrants. Several ethnic registrants also came out for a cheek swab, expanding the diversity of the registry and giving hope to patients worldwide looking to find their one match,” said Denise Tran.

“Hopefully, Lifeline will be able to host another swabbing event next semester.” They also offered pamphlets about stem cell and marrow donations.

Donations are not based on blood type, but instead on proteins called antigens that are found on the surface of white blood cells. Donors are catalogued in a database based on their antigens and are called by the CBS when a donation is needed.

One example of their use is in bone marrow, which contains stem cells, and is found in the soft tissue at the centre of the bone. When bone marrow dies, one treatment is to find a bone marrow match and replace the marrow.

Certain people have peripheral blood stem cells (PBSC) which are stem cells that are too few in number for transplant purposes. Donors with PBSC can be given granulocyte-colony stimulating factor (G-CSF) injections in order to increase their number of transplantable stem cells.

The marrow donation process is done under anesthesia in a hospital. Donors lie on their stomachs and have needles inserted into their pelvic bones at both sides of their lower back. Three to five percent of the total marrow is extracted and the body replaces it in a matter of weeks. The process takes one or two hours and donors are generally discharged at the end of the day.

Side effects include fatigue and soreness. Donors have said that the process (after anesthesia wears off) feels like falling on ice.

PBSC donations don’t require needles to be inserted into the bone; instead blood is drawn from the arm, neck, or thigh and is passed through a centrifuge which separates blood cells from stem cells and is then returned to the body. The process is called apheresis.

OneMatch looks for donors from all ethnicities. The markers used to make matches are differ by ethnic group. Donors are matched with patients of the same ethnicity.

There are eligibility criteria that CBS outlines on their website, which was not outlined in the OneMatch pamphlet. Donation criteria are the same for stem cell and marrow donations as for blood donations.

Donors must be between the ages of 17 to 50 and must be willing to donate. Donors must also weigh at least 50kg (110lbs) and must be in good health. Indefinite deferrals are also applied.

People who have lived in certain areas of Africa, have had sex with someone from these parts of Africa, or had a blood transfusion in certain parts of Africa, are indefinitely deferred from donating. Men who have had sex with men, even once, since 1977 are also not permitted to donate. People suffering from diabetes, low iron (hemoglobin levels), chronic fatigue syndrome, or a false positive (from an infection) are not permitted to donate.

OneMatch urges stem cell and marrow donors to also donate blood because patients in need of marrow transplants also require large quantities of blood before and after they receive a transplant.

For more information about OneMatch and how to become a donor, students are asked to visit www.onematch.com.