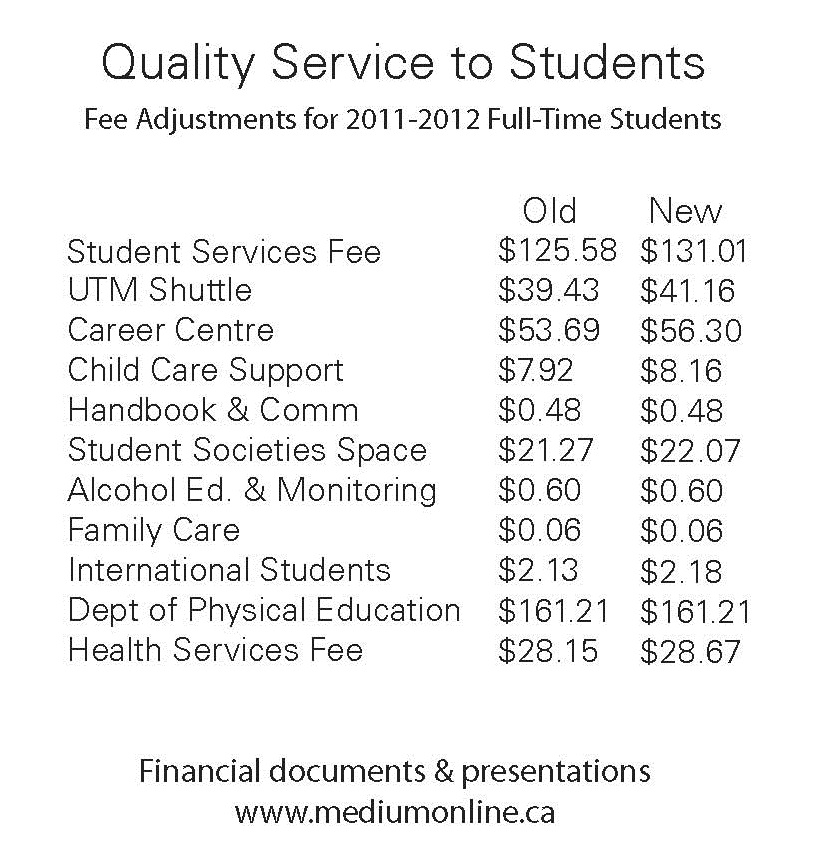 In late November, December, and January, UTMSU and UTSU participated in the Quality Service to Students council to shape operating plans and budgets.

Voting at QSS won’t happen for several weeks, and will be held in late February to allow the student governments to make their final decisions.

The current proposed changes are as follows.

The Career Centre, which has seen a 25% increase in résumé critiques, a 36% increase in one-on-one appointments, and a 39% increase in student fair attendance from the 2008-09 school year to the current school year, is looking to increase their fees from $53.69 to $56.30 for full-time students (4.9% increase).

The Department of Physical Education proposed no increase to their fees for the 2011-12 school year. The fees will remain at $161.21 for full-time students and $32.04 for part-time students.

The Family Care Office, which has assisted 77 UTM community members this past year, including seven students, 20 staff members, 48 faculty members, and two departments, is looking to increase their fees by 3% in the coming school year. Fees currently stand at $7.92 and are proposed to increase to $8.16 for full-time students for the school year and from $4.08 to $8.16 for the summer.

A Q&A session was held on January 21 for students to ask questions about the proposed fees. The UTM Grads Students’ Union, Residence Council, UTM Athletics Council and UTMSU have a seat on QSS and will be voting.

UTMSU president Vickita Bhatt said that UTMSU will not vote on any fees “until we have discussed it at our Ministries, Commission, and Board. We want to get as much student feedback before making a decision.”