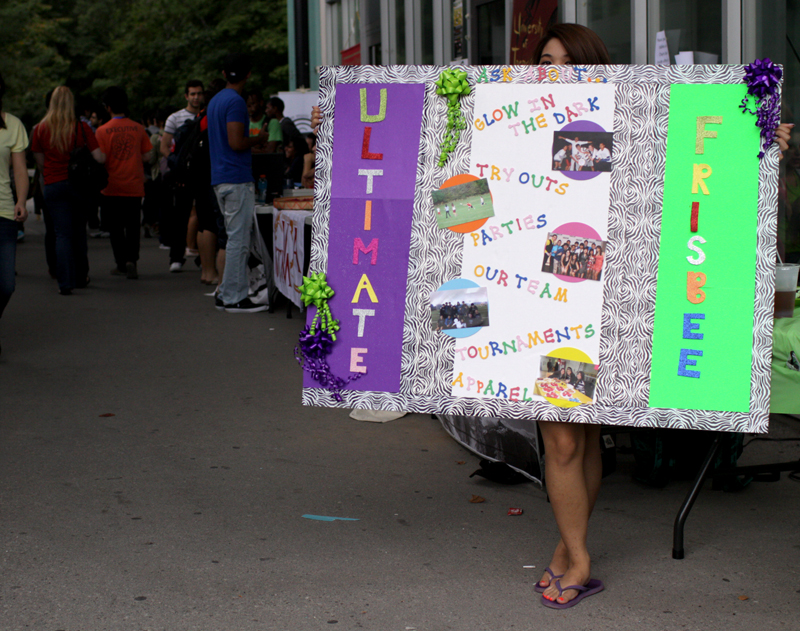 While some students get back into early-morning routines, others fill the air with the clacking of chairs and the chatter of ideas during UTM’s Clubs Week.

Tables for UTM’s Music Club, Vietnamese Student Club, Style and Profile Club, and the Medical Club, among others, sat in rows outside the Student Centre. Clubs Week is a tradition at UTM that comes once a semester to showcase various extracurricular clubs and societies for students with common interests to join. Clubs Week typically runs the entire second week of each semester and covers pastimes and interests for almost every walk of life on campus. Themes include sports, hobbies, culture, academics, and faith-based groups.

Clubs Week is an effective way for new and international students to become involved with the UTM community, as it allows different people to get together for a common cause. Clubs often offer new members weekly get-togethers, field trips, food, or even small giveaways for joining.

Most clubs require a membership fee, which is partially determined by the size of its budget.

“You have to present the UTM Student Union (UTMSU) with a budget. The budget will cover the costs of running the club, the costs of running special events, and the cost of keeping things afloat,” said Michael Hanson, Chief Executive of the Video Game Club. “It’s very important to get the numbers as close to what you need as possible, since the student union has a limited budget for these sorts of things,” he added.

If a club doesn’t receive the necessary funding to “keep themselves afloat”, they must resort to more creative measures, such as raising the cost of membership, holding bake sales, or even spending money out of their own pocket.

“It can be a challenge to try to bridge the gap when funding isn’t available, but at the same time, it won’t be a problem if you’re able to get many people to sign up and pay their fee on time,” said Hanson.

In order for a group to be recognized as a club, the group must first become recognized on campus and build a membership base before completing the initial paperwork. The executives of the club must prove that it is a niche that needs to be represented for the upcoming school year. The paperwork for Clubs Week is due at the end of summer break, and budgets usually solidify during the second week of the school year—but in some cases, even later.

Some students try to avoid Clubs Week. They feel like there isn’t a group that supports any of their interests, or they’re afraid of being turned down. According to the rules set out by UTMSU, a student shall not be discriminated against, even if they don’t share the same values as the club in which they’re interested. Others, who are just settling into university for the first time, just don’t have the time or patience for the large crowds, loud music, and constantly being flagged down to join clubs.

UTMSU runs Clubs Week at the beginning of each academic semester, but students are welcome to join clubs and get involved at any time. For a full list of clubs and societies, visit utmsu.ca, or check out the club offices on the second floor of the Student Centre.