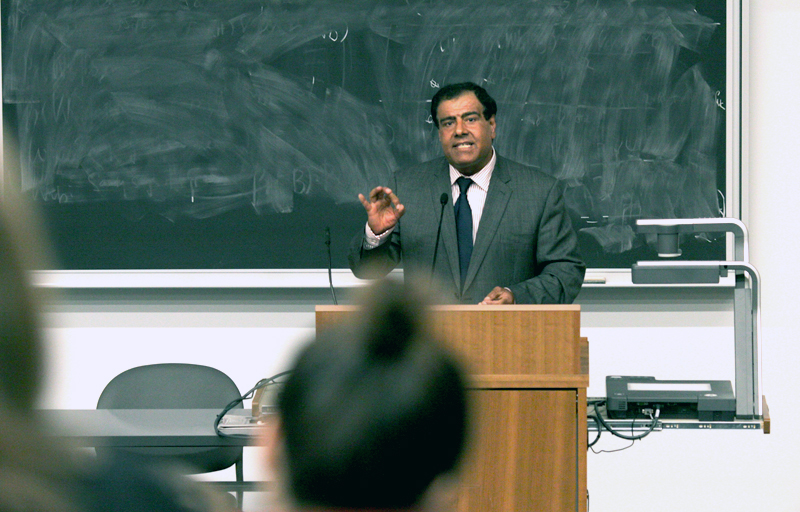 Deep Saini, UTM’s principal and vice-president, introduced the lecturer in the Instructional Centre at 5:30 p.m. In his introduction, Saini remarked on the coincidence of this year’s lecture falling on Diwali, the Hindu “festival of lights”.

“Dr. Abuelaish is everything Diwali stands for,” said Saini: “Victory of light over darkness, victory of hope over despair, on this festival that looks forward to better things for humanity.”

During the Second Intifada in Gaza, the Palestinian obstetrician and gynecologist would travel to work in one of Israel’s hospitals, crossing the checkpoints that separated his home in the Gaza Strip from Israel.

He also gave frequent updates to news anchorman Shlomo Eldar on Israel’s Channel Ten about what was happening in Gaza.

Two days before the ceasefire, on the day that he accepted a medical professorship in Canada, an Israeli tank launched shells at his apartment, instantly killing three of his daughters and his niece. Abuelaish’s immediate and emotionally harrowing phone call to his friend Eldar after their deaths was broadcast live and later on YouTube, making him the face of human suffering in the war throughout the world.

After the death of his children, Abuelaish vowed not to hate those who had killed them. He did not turn into a vengeful man, but became even more adamant that there must be coexistence and peace between Palestinians and Israelis.

His memoir, I Shall Not Hate: A Gaza Doctor’s Journey, published last year by Random House, is currently on bestseller lists.

“Thank you for welcoming me to my home, University of Toronto, the place that spreads light, spreads education,” said Abuelaish. “What I suffer is man-made. That is the hope. All of us can challenge man-made suffering. We can inspire hope. I urge all of us to dream big. With goodwill, hard work, and determination, everything is possible in life. The only impossible thing I believe in is to return my daughters back.”

Speaking more about his daughters, Abuelaish said, “The most precious thing in the universe is a human life. My daughters are alive. They are living amongst us. I feel I’m watched by them. I fully believe one day I will meet them again.”

Abuelaish urged students to not only hope and dream big, but to commit themselves to action.

“Faith without actions is useless. As students, don’t underestimate your action. We must take action and do something,” said Abuelaish. “Act; don’t wait for others. Take initiative and don’t think that any of us is far from the rest. Saving others, you save yourself. No one is free as long as one is not. As Grandma Moses said, ‘Life is what we make it.’ ”

After the one-hour lecture, Abuelaish took questions from the audience.

One female student asked Abuelaish how he is able to refrain from hating the Israelis after the horrific personal tragedy that he has experienced.

Abuelaish’s answer was simple: “Hate is a great burden to bear.”