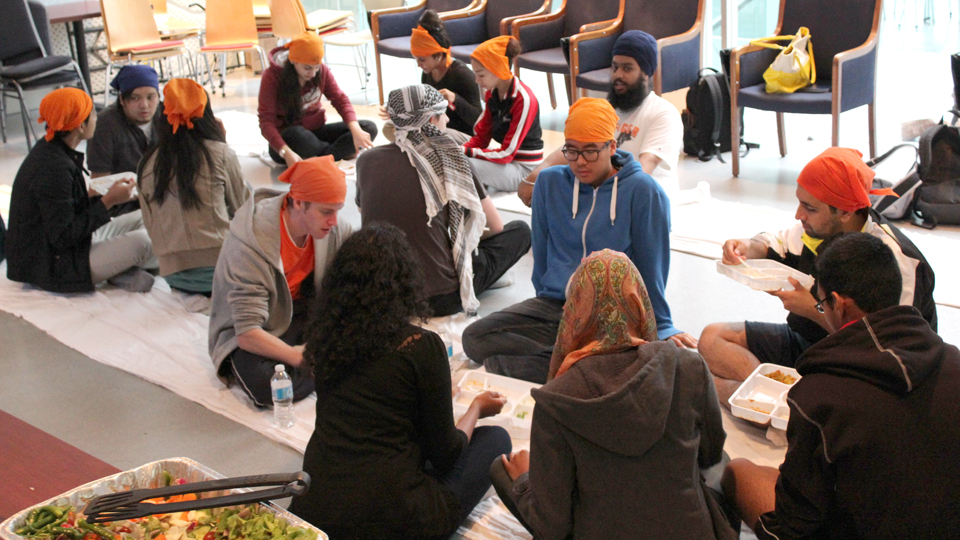 The Sikh Students Association offered free food to 150 students in the Student Centre last Friday as part of a langar, a traditional event “where everyone can come to enjoy a free meal regardless of their cast, creed, religion, race, gender, and colour”, according to SSA president Anmoldeep Kaur Sohal.

“There was a larger turnout this year because the students are more familiar with the food now,” said Sohal. “Last year, a lot of students wondered whether they were allowed to join in the langar if they weren’t Sikh.”

Sohal, her mother, and her neighbour cooked the food the previous night and early morning. The fare was vegetarian in order to remain accessible to everyone, and included cooked vegetables, rice, yoghurt, rice pudding, and roti.

The meal began at noon and the trays were emptied by 3 p.m. Emily Smith, a first-year CCIT student, described the meal as “better than campus food”.

Shoes were scattered on the floor outside room 280, because those who join the langar must cover their heads and remove their shoes as a sign of respect. Ben Buckley, a fourth-year computer science student, said he understood why he was asked to do so.

Sikhs religiously revere a number of historical gurus, one of whom, according to Sohal, formalized the practice of langar, which led to his wife’s custom of providing sweet rice to visiting adherents.

The SSA is a UTM student club that represents the Sikh community and religion to the campus. Although the SSA receives funding from the UTM Students’ Union as a registered club, the cost of the meal was taken up by Sohal and her family. Sohal considers this the spiritual duty of seva, which she defines as “selfless service without expecting anything in return” which helps, in the words of one of the gurus, “to recognize the human race as one”.