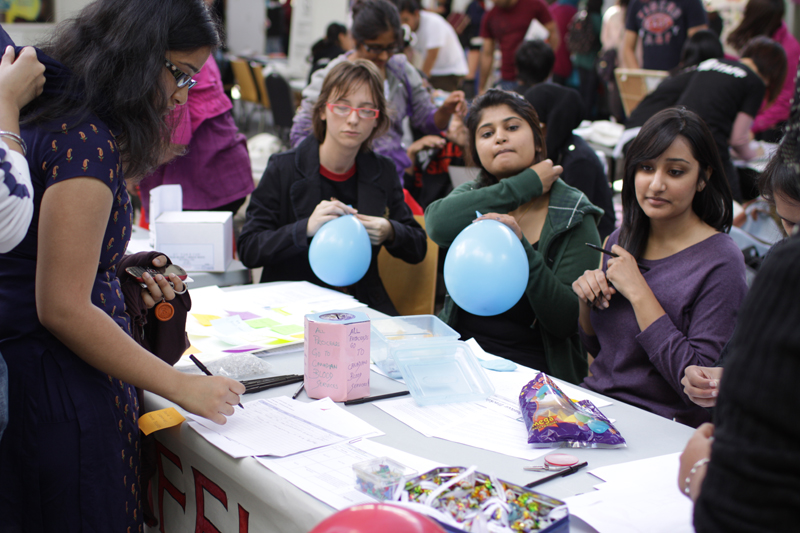 The UTMSU Winter Clubs Week was held in the Student Centre from January 10 to 14, from 10 a.m. to 5 p.m. each day—and was not received well.

All the booths were inside the Student Centre due to the cold weather. Each club had a table set up with a sign or poster with the name of their club. Some clubs had baked goods on their tables to raise money for the events they will be holding throughout the term. Other tables had bowls of candy or chocolate.

To sign up or a club, all one had to do was to go up to the table and write down their name and email address on the sign-up sheet.

“Since we have a lot of new clubs registered with UTMSU since fall 2010 that didn’t have a chance to promote themselves and recruit new members, we have given them a chance,” said Danny Dong, VP Campus Life. “We have also had requests from old clubs saying they would like another Clubs Week. That’s why we now have a Winter Clubs Week.”

“We have a lot more new clubs than last year,” said Dong. “We registered and approved 10 new clubs after Fall Clubs Week. A professor even came to me and said this is the first time he has seen the Student Centre come to life in many years.”

It was apparent that this Clubs Week had far fewer students coming out than the one held in the fall. In September, students flocked to the Fall Clubs Week with enthusiasm. Now there were only a few students wandering from table to table.

Amreet Kaur, from the UTM Women’s Centre, said, “My general feeling about Winter Clubs Week is that it was not nearly well-attended. Though it’s a good initiative, my suggestion would be to perhaps do it in the CCT building because at least those clubs that want to participate would be more visible to students.”

“We didn’t have as many new members,” noted Rahim Mohammed, administrative director for the UTM Cricket Club.

The sign-up sheets for the UTM Cricket Club had been three pages long after the Clubs Week in the fall was finished. This time around, there was barely half a page of names on the sign-up sheet. Mohammed, who divided his time between manning the UTM Cricket Club and the UTM Debating Club tables, thought that the weather might be the reason for fewer students coming out.

Among the clubs present for Winter Clubs Week were Chinese Undergraduate Association at University of Toronto Mississauga, UTM Women’s Centre, and Organization of Latin American Students.

New clubs this term include the UTM Conservatives, the University of Toronto-Mississauga Ukrainian Students’ Club, the UTM Vietnamese Association, the UTM Drama Club, the U of T Electronic Music Appreciation Club, and the Pink Ribbon, a club to promote breast cancer awareness.

Dong revealed future plans for campus life within the next two weeks.

“Our annual event, ‘Unity for Diversity’, is coming soon, from January 25 to January 27,” he enthused. “The first day is International Cuisine Day. All the clubs will bring food from their country. It’s free for all students. They can come to the Student Centre and try out different food from different countries. That’s pretty awesome. The second day, we will have a cultural show. We will give each club that signs up five minutes to perform whatever they want. The club with the best performance will get a prize.” There will be pizza and drinks at this event, says Dong, and it will be held at the Blind Duck Pub at 7 p.m.

“On the third day we will be doing a Casino Royale Day at the Student Centre. Students will need to pay $2 to $5 (maximum) fee to buy in. They can use the chips they bought to play different games around the Student Centre and exchange the chips for prizes at the end of the night. We host this event every year and it has been very successful. Students will get to experience different cultures.”

“Students can learn different things outside of class,” he said. “They can have different experiences that they don’t get in class.”