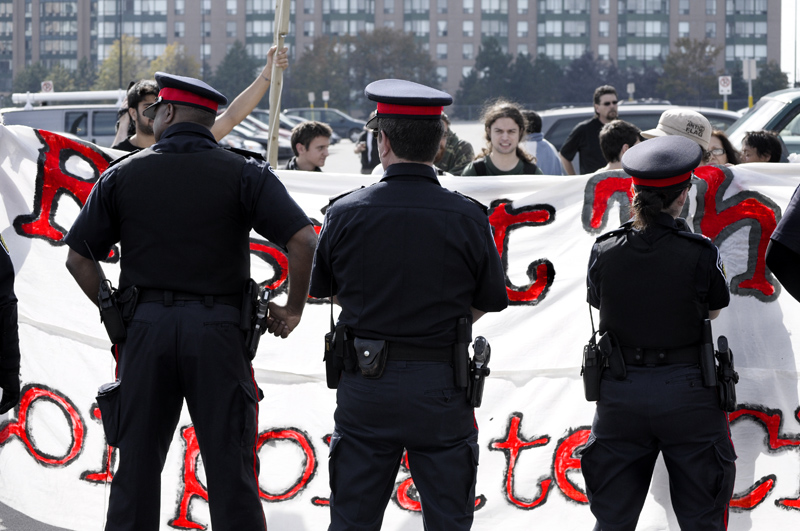 On October 13, the Canadian Pacific Spirit Train arrived at its third scheduled stop at the Cooksville Go-Station in Mississauga Ontario. The train, a ploy by the Olympic organizers to promote Vancouver 2010 Olympic spirit, will be stopping in cities across the country on its trans-Canada journey to Vancouver. At each stop, there is a concert, Olympic-sponsors giving away free promotional material and fun family events, hoping to promote and build up anticipation for the upcoming Olympic Games. However, despite the excitement over free promo-swag and concerts, the Spirit Train has received harsh criticism from activism groups such as No One Is Illegal and NO2010. The groups argue that the Canadian government is paying corporations to build one-use only Olympic sites where they receive large profit margins, while simultaneously evicting and destroying native land to build these Olympic sites. Both groups have protested at Spirit Train stops since the train left its first stop in Montreal.

Before the Spirit Train carnival officially opened yesterday at 1:00 p.m., protesters organized themselves outside the entrance to the Spirit Train parade amidst four police cruisers and countless police officers. In order to control entrance to the carnival, officers had established a fenced perimeter around the parking lot where the carnival was to take place. The protesters had pots and pans that they hit with spoons to make noise and had set up three banners with slogans painted on them such as ‘No Olympics on Stolen Land’ while they chanted, ‘This is what your democracy looks like/This what your democracy feels like’.

When the carnival opened, protesters moved on the entrance, promptly being turned away by the police and Go-Transit officials. After being denied entrance, the protesters decided to block the entrance way, claiming, that if they were not allowed in, no one else should be either. The police tried numerous times to disrupt the protesters, often by driving ambulances and police cars through the entrance, claiming that there were sick and injured people inside who needed to go to the hospital. The protesters quickly realized this was just an attempt to move them out of the way.

After the protesters gained significant ground and were partially through the entrance to the carnival, the police moved on them and forcefully pushed them out of the carnival. Of the twenty-odd protesters, it took approximately ten officers to remove the protesters from the entrance way. Once the protesters were outside the entrance, an additional fifteen-or-so officers (including two bicycle officers who used their bicycles as a barricade) joined their fellow officers where they set up a human perimeter of about thirty around the entrance. This ‘buffer zone’ allowed families to enter and enjoy the festivities, not having to endure the crowd of protesters. The protesters stayed at this state for another fourty-five minutes, until they decided to dismantle their demonstration. The protest ended peacefully, despite the sudden violent outburst of the protester-police confrontation. After the demonstration was over, one protester asked the police, “Can I have my pots back? We need to cook and eat, you don’t want to have starving protesters,” regarding her confiscated pot she was using to make noise.

For more photos, see my blog at www.matthewfilipowich.ca/blog