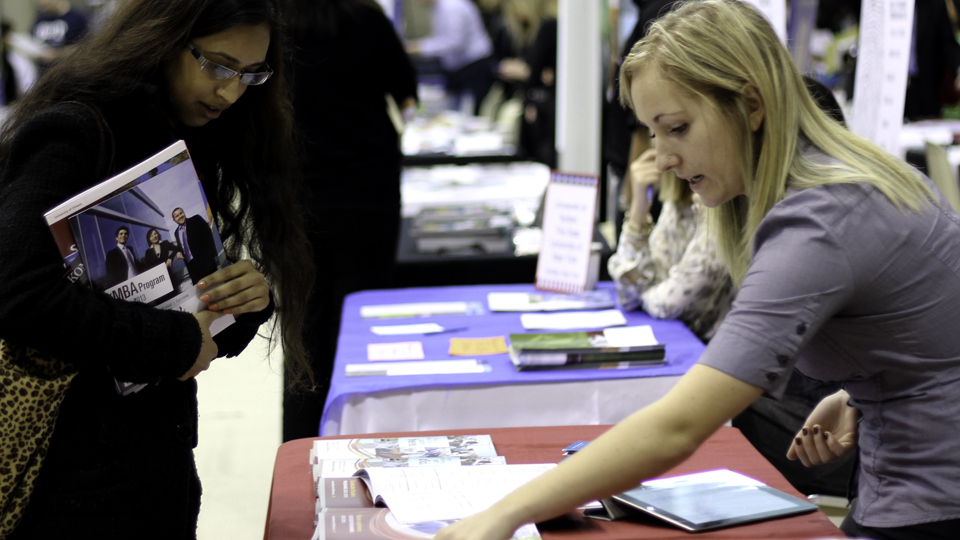 Nearly 100 graduate and professional schools set up shop to meet prospective post-graduate students at the Graduate and Professional Schools Fair last Wednesday in the RAWC.

The turnout of this year’s event was “right on par with what we had last year”, according to Michelle Atkinson, the coordinator of event and employment services at UTM’s Career Centre. A total of 960 students came by from 10:30 a.m. to 1:30 p.m.—two fewer than last year.

The schools were grouped by field of study, making it easier to visit multiple schools in only three hours.

A wide array of education and teaching schools greeted the potential teachers of UTM, making up about 16% of the schools at the fair. Nine law schools followed, including overseas ones. About 36% of the schools were various departments’ graduate programs, both national and international. Finally, students ventured down the length of the RAWC to visit post-graduate schools for business and MBA programs, which accounted for about 15% of schools at the fair, and health and medicine programs, which accounted for about 25% of the schools.

Steph Kolodij, an undergraduate studying forensic science at UTM, visited the fair last Wednesday. “[I  was] looking to ask about forensic science master’s degrees, of which there is only one in the country,” she said. “This school has an undergraduate program, and no one to tell us where to go from here.” Kolodij added that the only other options for post-graduate work in her field are international programs, which would have heavy tuition fees for a Canadian.

The UTM Career Centre holds workshops and sessions that help students map out their futures, from getting through admissions to building useful skills such as networking.