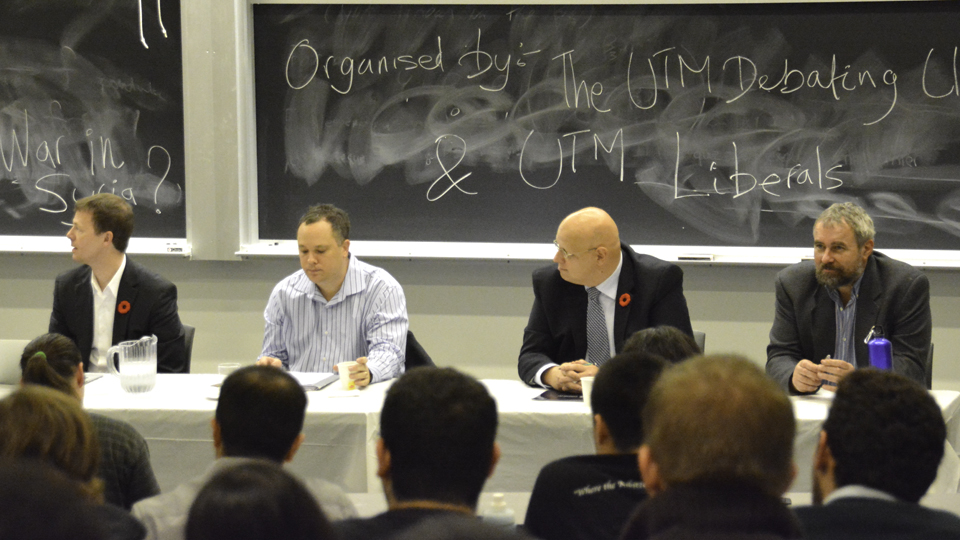 UTM professors and students with a taste for politics gathered to argue the motion that military intervention is necessary to end the civil war in Syria at the Great Professors’ Debate, organized by the UTM Debating Club and the UTM Liberals, on November 6.

Arguing for the motion were Prof. Sven Spengemann, who earned his law degree at Harvard Law School and served as a constitutional lawyer in Iraq during the war, and Prof. Justin Bumgardner, an instructor in the UTM political science department with expertise in international conflict and conflict management.

Spengemann opened with the argument that nation-building is Syria’s most urgent need and requires intervention. “Mr. Speaker, I argue for military intervention in Syria on the sole basis of protecting the civilian population from ongoing violence and atrocities. This is a civil war that has led to over 100,000 deaths and over 2 million refugees,” he said. He said that this was not in support of regime change, but the creation of humanitarian safe zones in Syria, adding that military intervention would be ineffectual without political reconciliation through disarmament, demobilization, and reintegration.

Jurgensen countered with an argument that the civil war was not the result of Assad’s admittedly oppressive regime but of foreign intervention itself, including by Qatar and Saudi Arabia in support of the rebels. Intervention, he argued, would involve the risk of unintentionally backing one side against another, a decision further problematized by the religious differences that characterize the two sides.

Bumgardner replied that intervention is the lesser of two evils and a moral obligation since it would prevent the enormous human suffering currently taking place in Syria, clarifying that the limited intervention that “resulted in success in Libya” would be preferable to the “full-fledged war” of Iraq.

Kotsovilis replied that military intervention involves mission uncertainties, civilian costs, threats to region stability, international cooperation, and other liabilities, and advocated instead for crippling sanctions, an atrocities tribunal, and a focus on refugees.

Spengemann concluded his side’s argument by arguing that only the last resort of outside influence can end the civil war, despite having instigated it, and affirming an international responsibility for peace, albeit at the undesirable cost of interference in Middle Eastern government. Jurgensen and Kotsovilis rebutted the earlier claim that Libya’s intervention had in fact been a success and restated the risks involved in the aftermath of a hypothetical failed campaign.

After the debate, the floor was opened up for students to express their views and ask questions. The questions included the viability of an intervention by the U.S. given its declining economic position and the relevance of the Sunni-Shia split in dividing the combatants. A survey was also conducted before and after the debate; the majority of students were undecided before it, but afterwards voted against the motion.

The event was attended by approximately 150 students. The UTM Liberals and UTM Debate Club collected donations for UNICEF throughout the evening.

“This event was a perfect blend of emotion and intellect,” said Prateek Sanyal, the president of the UTM Liberals.

“At the end of it all, Syria still remains an issue,” said Tuneer Mukherjee, the president of UTM Debating Club. “The debate held over here is certainly not held in the UN Security Council, nor is it held every day in the streets of the U.S. or Canada.”