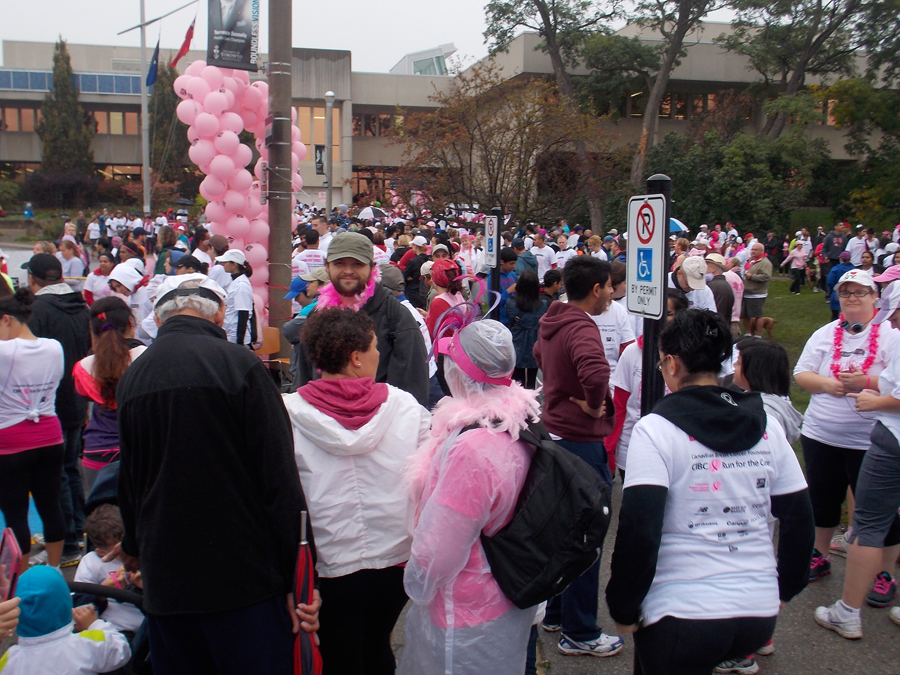 Access to campus from Mississauga Road from Collegeway North to Burnhamthorpe Road was restricted from 9:45 a.m. to 10:45 a.m.

Braving the light rain to run or walk in support of loved ones suffering from breast cancer—a disease with which one in nine women in Canada are diagnosed yearly—participants wore white t-shirts with the words “I’m running for my future” on the front and their team’s name on the back.

They decorated themselves with pink buttons, hats, and hair accessories and mingled around the registration and sign-in tents, media tents, the U of T Alumni Association’s tent, and other tents set up in a square on the lawn beside the William G. Davis Building.

The crowd heard speeches from breast cancer survivors, as well as UTM’s principal, Deep Saini, who reminded the community that associate chemistry professor Patrick Gunning and his team are conducting internationally acclaimed breast cancer research at UTM. At this point in time, they have designed a drug that cures breast cancer, multiple myeloma, and acute lymphoblastic leukemia in mice.

After the speeches ended, a team from a company named Get Cracking led the crowds in a heart-pumping warmup that transitioned directly into the run, called the “Survivor March”. The runners started shortly after the survivors began, followed by those who planned to walk the route across campus.