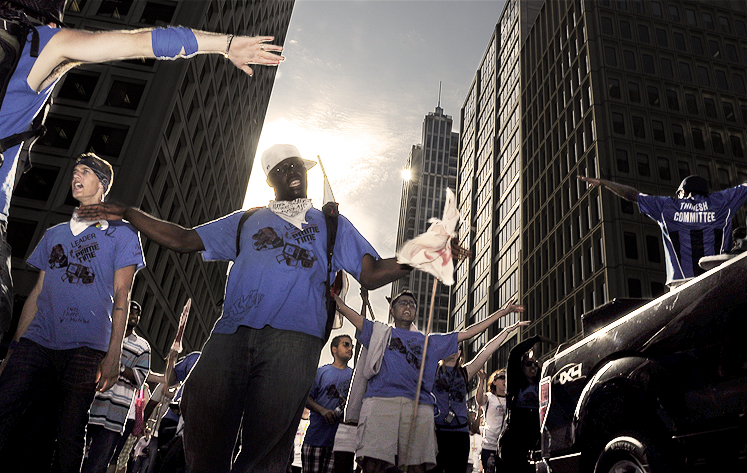 Hundreds of doe-eyed first-year students came out to meet mingle and march as the five-day Orientation Week event kicked off on September 1. The Transformers themed week entertained 900 new UTM students and 125 orientation leaders with a variety of activities.

A dry pub night held at the Blind Duck was first on the docket where students were treated to a party with music by Toronto-based radio station, Z103.5.
Due to the permanent closure of parking lot 2, this years carnival was held at the back of lot 8 near the RAWC. The parking lot was transformed to a carnival filled with snow cones, a Ferris wheel, inflatables and a concert hosted by CFRE radio. Over 4,000 students marched through downtown Toronto during the annual U of T Parade led by UTM students. Matthew Filipowich/The Medium

Many students tested their strength and endurance with the newly added rock climbing wall while others had the chance to meet campus clubs who recruited new members throughout the carnival.

For the second year in a row, Orientation Week fell within the Holy Islamic month of Ramadan. To ensure accessibility for all, signage was placed throughout the campus guiding students to prayer rooms made available all week.

The Orientation committee has been an amazing help, and this year all of the leaders worked as a team. The leaders really impressed me. The orientation committee was led primarily by orientation co-ordinators Johnny Ho and Gary Li, and supported by VP Campus Life Andrew Lalla, and committee members Dhananjai Kohli, Marc Bressler, Amy Lin, Thinesh Sellathurai, Steffi Huynh and Anisa Rampersad.

One eager first-year student, Kathy Chu, a social sciences major, couldnt wait for Orientation Week to meet her future classmates. She decided to organize a dinner two weeks prior to Orientation Week at Boston Pizza, which was attended by nearly 50 incoming students.

On Friday, the St. George campus was filled with over 10,000 incoming students from all U of T colleges. There were friendly competitions between the campuses with the brunt of the name-calling going towards UTM students. St. George would call out St. George rejects, but the UTM orientation team responded and completed the chant with …get the best sex.

The annual parade, which is traditionally led by UTM students, was stalled for over an hour due to technical difficulties. This resulted in Trinity College shouting we stop for no one! as they marched away. The orientation co-ordinators kept students occupied by leading cheers for over an hour, causing some of them to lose their voices before the parade started.

Orientation week is all about the first year students. We are here to make sure that they have the best week, even if we lose our voices in the process. noted Li.

When the technical difficulties were finally resolved, UTM lead the parade, followed by the various U of T colleges. Onlookers took photos of rowdy students and danced along to music by the Black Eyed Peas.

After an hour of marching down the streets of Toronto, the parade came to an end when UTSU president Sandy Hudson stopped the parade at Queens Park and got on the UTM microphone to give a speech about rising tuition fees. The parade culminated with Hudson asking the first-year students what do we think about Queens Park, to which they were coached to reply fuck Queens Park!

The parade ended with a dinner and show at Medieval Times and Orientation Week on the whole wrapped up on Saturday, which saw 250 students visit Canadas Wonderland.