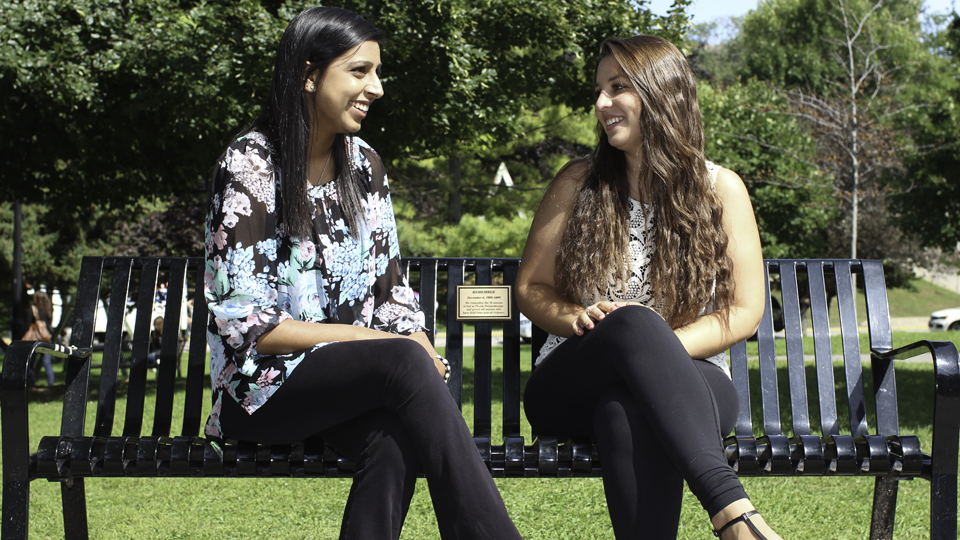 In the midst of intensive planning for arguably the most anticipated UTM Students’ Union event of the year—Orientation Week—the two key people in charge of the planning and execution of festivities resigned from their positions at the students’ union, three weeks prior to the start of Orientation.

This was Lara Stasiw and Neelam Din’s second resignation. Stasiw and Din allege that their first resignation, which was “not accepted”, came before they were yelled at and “demeaned” by UTMSU executives. Their second resignation followed an event in which the president of UTMSU, Raymond Noronha, claims Din “harassed and attacked in person and later via email” a frosh leader during the second frosh leader training. Din has disputed this claim.

Not for “personal reasons”

UTMSU’s executive director, Walied Khogali, wrote in an email on August 15 to the executives of UTMSU-funded clubs and societies that the resignations were due to “personal reasons”.

“I did not resign for personal reasons. I resigned because I no longer supported the environment that was being created by UTMSU. [It] was blatantly hostile,” said Stasiw in an interview. “We were yelled at numerous times in the [UTMSU] office. Both of us have cried numerous times. We have been demeaned by all except for Hassan [Havili, VP part-time affairs] and Grayce [Slobodian, VP campus life], [and] at some point, most blatantly by Raymond [Noronha, president] and Nausheen [VP internal and services].”
Neither Stasiw nor Din are strangers to Orientation Week, having both attended their own orientations as first-year students.

Stasiw went on to become a frosh leader. She was an orientation coordinator last year, while Din served as an Orientation Committee member.

Problems between the new OCs and the executives of UTMSU began before that, according to Stasiw. For one thing, she said, she had to ask for last year’s final numbers in the Orientation budget before being told she could not have a copy but could “briefly” look at it. On top of that, said Stasiw, her opinion was “not valued or respected”.

“All of our decisions for Orientation were overlooked and undermined,” she said. “It was very difficult not to stand up for what we truly believed was right. However, we were very quickly demeaned and told we were being disrespectful when we were merely calling attention to the inequities and injustices put forth by executive members,” said Stasiw.

Noronha said in an email to frosh leaders, “We have always treated the orientation coordinators with respect and expected nothing less in return. Unfortunately, respect for us was lacking and it was evident during the decision-making process.”
Stasiw acknowledged that she and Din did not always respect the decisions made by UTMSU executives, alleging that those decisions were not always in the best interest of students.

In one instance, the executives went in camera and voted no to an Argos game that the OCs wanted first-years to experience as part of Orientation. The executives did not provide reasons for their decision, said the OCs.

Din alleged that Noronha sat her down one day and told her, “Everything that has happened that has been bad thus far is your fault.”
“It was after their lack of transparency that we realized they were making decisions based on what they personally felt was best for them rather than what would be best for students,” said Din.

Stasiw said that one of her goals as OC this year was to bring new ideas to Orientation rather than continue with the same activities as past years.

“We felt going to an Argos game with the rest of U of T would have been the perfect opportunity, especially when it didn’t affect the budget or ticket prices. It was unfortunate to have the execs vote no and not be transparent about their reasoning,” said Stasiw. “Leaders should be embracing [this idea] rather than shying away from [it] merely because of the associated liability, which is no greater than any other frosh event.”

In a meeting with Noronha, Khogali, Adam, and Slobodian, they outlined their reasons for resigning, but were convinced by Khogali to stay.

“We continued [to work at UTMSU] because we believed the broken promises we were fed and the commitment to improve the work environment,” said Stasiw.

They held leader interviews and training.

“Leaders that myself and Lara felt uncomfortable with were put on the leader list,” said Din. “There are some people that should not be on that leader list right now […] they are leaders because of the executives.”

Noronha, on the other hand, said UTMSU has a very transparent process for hiring leaders. Applications that are sent in to UTMSU are screened by the OCs under the supervision of the VP campus life and interviews take place.

“After the interview, the final list of names is reviewed by the UTMSU Executive Committee to make sure we do not take on leaders that might have been problematic in prior years,” Noronha said. “That being said, UTMSU does not have any preferential hiring for any leaders or staff members.”

During the weekend of August 10, the second leader training took place, in which Din had allegedly “harassed and attacked” a frosh leader, according to Noronha.

The leader in question was a volunteer at last year’s Orientation and had, according to the OCs, repeatedly broken rules. This leader was not supposed to be on the list, said Din, but Noronha insisted that she be made a leader.

Noronha addressed this issue by saying that the leader did well in her interview and her having a “personality conflict” with the OCs was not a sufficient reason to bar her from participating as a leader during Orientation.

“Myself, along with other members of the executive team, had previously worked with that leader and we knew that she would be an amazing leader during Orientation Week—and she was,” said Noronha.

At the second leader training on August 11, the leader engaged in a heated conversation with Din about not obeying the rules at last year’s Orientation, at which the leader was a volunteer.

At that point, according to Din and Stasiw, Noronha raised his voice and told Din that she had to leave.

“I said, ‘Fine, I will leave, but you will have to make the decision of keeping her or me.’ Then I left and I cried. Leaders saw me and committee saw me,” said Din. “That’s when people saw that this isn’t the best place to be working in if your employees are crying every week because things aren’t proper.”

When asked about the incident, Noronha replied, “A leader was harassed and attacked in person and later via email by one of our orientation coordinators. […] I stopped the OC right there from continuing the conversation with that leader.

“It’s ironic that Neelam mentioned herself crying,” added Noronha. “It was actually the leader who had tears in her eyes, and myself and Ro’a are witnesses of this fact.”

Din denied that she had harassed the leader either in person or via email.

Orientation by someone else?

Stasiw and Din handed in their resignation the next day. It was approved by the executive committee three days later and ratified by the UTMSU board of directors at its meeting of August 19. Stasiw, Din, and their supporters discussed the possibility of Orientation being done through a different organization, but Stasiw said that the majority felt it was too late to do so without affecting the Orientation experience for first-years.

“We were not proud working for a students’ union we felt did not stand up for what was best for students,” said Stasiw. “We handed in our letter so we would have a clear conscience, knowing we did all we could in the positions we were in and with what material we had.”
When asked his opinion of why Stasiw and Din resigned, Noronha responded, “My opinion is not relevant. Ms. Stasiw and Ms. Din resigned for reasons that we as employers have tried to resolve on many occasions […] Unfortunately, the threat of resignation was used as a tactic to intimidate or as a means to reverse decisions that were discussed and finally decided upon.”

“We resigned as we wanted students to realize they do not have to put up with abusive conditions to achieve anything,” said Stasiw.
After their resignations, Noronha emailed frosh leaders to inform them of the news.

Stasiw alleged that this email slandered her and Din. “It was extremely untrue and was a matter of ego before professionalism,” she said.

The email in question was sent on August 13. Noronha addressed the incident that took place at the second frosh leader training.

“Over the weekend, a potential leader was harassed and attacked in person and via email by one of our orientation coordinators,” wrote Noronha. “We had no choice but to take all the necessary precautions to stop the use of our resources to attack any student.”
After their second resignation, Stasiw and Din approached Khogali and requested that, at the request of several leaders, they continue their term as OCs, so long as they did not have to communicate with UTMSU executives on matters unrelated to Orientation.

“Seeing as no executive played an active part in any of the planning until we resigned, we were aware of the implications on first-years should we not complete [our work as OCs],” said Stasiw, who added that Orientation planning at that point was far behind schedule. They were later told that Noronha’s immediate response to the request was a blatant “no”.

Noronha said he is unaware of such a request.

“It is sad that the OCs chose to resign a few weeks before Orientation Week. Since their first resignation, I have pleaded with both Lara and Neelam to continue to work at UTMSU as orientation coordinators, but we emphasized that it is important to respect their colleagues and the decisions made by the elected executive,” said Noronha.