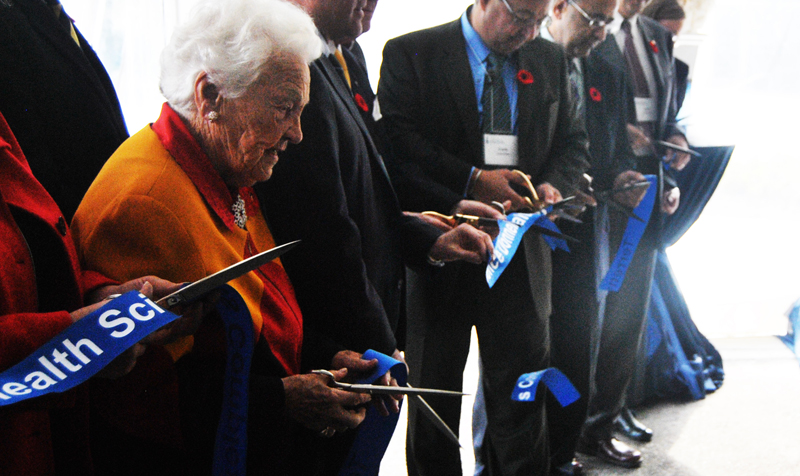 Under a white canopy next to the CCT Building, faculty, staff, and members of the community gathered to celebrate the completion of the official opening of the Terrence Donnelly Health and Sciences Complex and the Mississauga Academy of Medicine on Tuesday.

The academy is a partnership between the Government of Ontario, UTM, the U of T Faculty of Medicine, Trillium Health Centre, and Credit Valley Hospital. This year, 54 first-year medical students officially enrolled as students at the St. George campus will call the $37 million, four-storey structure home. The biomedical communications program and the Department of Anthropology also share the building.

In spite of the distance from St. George, the program will provide medical students with the tools and clinical opportunities to specialize in general surgery, internal medicine, psychiatry, and both family and community medicine.

“I noticed that at Credit Valley the physicians want to learn about the students. I didn’t see that in the downtown campuses,” said Shawn Chhabra, a first-year Mississauga Academy of Medicine student. “When I though of what I wanted to get out of my four years, particularly in the last two clinical years, I knew that to get that real hands-on experience, being in a smaller setting that’s more community-focussed would happen in Mississauga.”

The academy will have a total of 216 students in the four-year program, providing the most close-knit learning environment in U of T’s Faculty of Medicine.

“I think because we’re the first ones here, there will be a lot of responsibility on us to take a lot of initiative to try and emulate the same things that are occuring downtown and make sure that we have the same resources available to us. It’s going to test our leadership abilities,” said Jessica Rabski, another first-year MAM student.

The TDHSC includes lecture halls and classrooms equipped with videoconferencing. Lectures are broadcast live from the St. George campus so that UTM medical students can engage in the lessons and observe dissections.

“It is a testament to our ability to provide first-rate education to our students,” said Deep Saini, U of T’s vice-president and UTM’s principal. “They participated in that lecture as if they were all in the same location. I have sat through one of those lectures and it is truly an amazing experience.”

The MAM is the university’s fourth medical academy and the first based outside Toronto.

“It’s so great to have these students at the Mississauga Academy of Medicine, and I just met five of them. They are not from Mississauga, but I can assure you that I’ve already talked to them and when they graduate, they’ll set up their office in Mississauga. And I’ll be working on the other 50 as well,” said Mayor Hazel McCallion.

The TDHSC received funding from the Government of Ontario and private donors, Terrence Donnelly and Carlo Fidani, to train highly skilled doctors that will practice in Ontario and provide more efficient healthcare.

“We have here in Ontario one of the best healthcare systems in the world, but the benefits of that system must be made more accessible at the local neighbourhood and community level,” Terrence Donnelly said.

After the reception, medical students led group tours around the building.