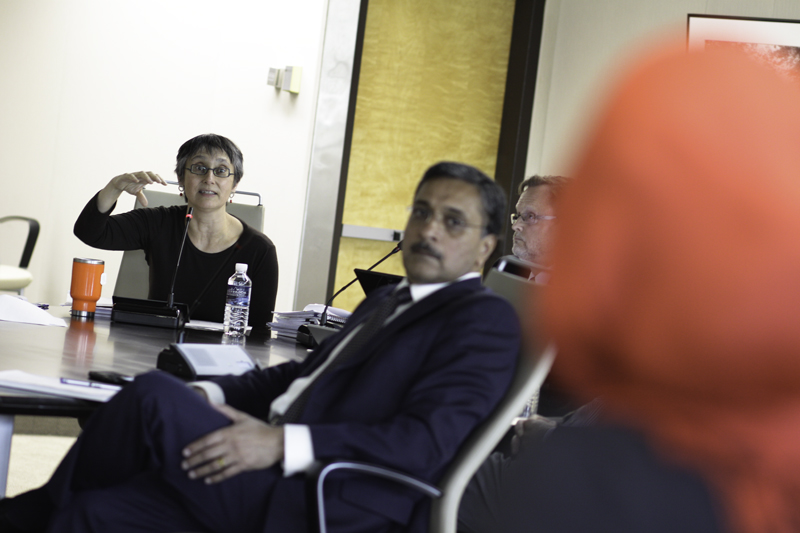 The Governance Review Committee held its third town hall of the year at UTM on Thursday afternoon to explain the restructuring of decision-making bodies.

Since the inception of the university-wide Towards 2030 planning process, the University of Toronto’s Governing Council, the highest decision-making body at the university, established the Task Force on Governance which produced a Governance Report that recommended the restructuring of bodies at the satellite campuses.

Louis Charpentier, secretary of Governing Council, presented the structure and mandate of the proposed governance model in Council Chambers.

At the last Town Hall in January, the committee presented recommendations including that UTM and UTSC will have their own Campus Councils with separate committees to review academic and campus affairs to tailor decision-making procedures to the needs of the local community.

On Thursday, Charpentier presented the proposed mandate for Campus Council (CC), which would be comparable to a board of Governing Council, and would only be concerned with matters affecting UTM’s objectives and priorities, the development of these plans, and the effective use of resources. The CC would be comprised of internal and external members from the five estates being represented: students, faculty, staff, alumni, and community. Of the 26 members that are expected to sit on CC, thirteen would be internal members. Of those internal members, three are students.

According to Professor Amrita Daniere, the Vice-Dean Graduate and chair of the Governance Review Committee, the CC is envisioned as a body to vote or approve things that have already been debated and negotiated at the Campus Affairs Committees and Academic Affairs Committees, both of which are being created under the new model.

The Executive Committee would serve as the agenda-setting function, with membership appointed annually by the CC.

This new governance model is expected to replace the ECC when it comes into effect.

After Charpentier presented the new model, he and Daniere answered questions from those in attendance.

“The idea isn’t that any of the new bodies that we’re focussing on today is going to exactly mimic the size of the ECC,” Daniere said. “The size isn’t as important as the percentages and the representation of the different five estates. It’s not a one-to-one replacement with ECC. We’re proposing a different structure now. This is a totally different animal than ECC.”

Representation of students on these committees was brought up many times during the Q&A session.

Gilbert Cassar, president of the UTM Students’ Union, along with the union’s Executive Director Walied Khogali, expressed disappointment in the new model.

Besides the fact that student representation has been reduced, UTMSU’s other main concern was that UTM is being forced to “adopt a sort of mirror model from the Scarborough campus”.

The model will be presented to the Governing Council for approval on June 25 with the implementation taking place from 2012 to 2013. The expected effective date of changes is July 1, 2013.