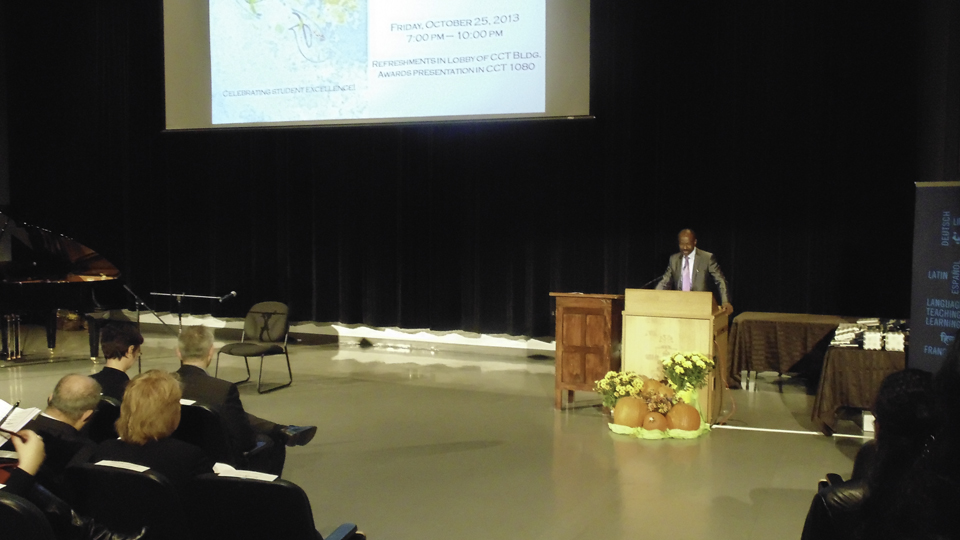 Last Friday, students, their families and friends, faculty, and staff gathered in a lecture hall in the CCT Building to support those who won awards and to enjoy musical performances.

The chair of the department, Professor Emmanuel Nikiema, made welcoming remarks and introduced Professor Amy Mullin, the vice-principal academic and dean, who said a few words before turning the microphone over to the co-presidents of the Language Studies Academic Society, Caitlin Cook-Yeo and Monia Manirakiza. Mullin was on hand before intermission to congratulate each student after they received their awards; winners were announced in sections by the professors in their field.

The awards included general program awards, faculty choice awards, and scholarships, including some by external sponsors. The department also honoured course instructors who “have distinguished themselves as outstanding teachers”. The Italian awards included scholarships to study Italian abroad.

Many award-winning students were not in attendance to pick up their award because they are currently studying overseas in Florence, Italy as part of the Study in Florence program offered by the department.

This prompted Nikiema to joke that he was jealous that the French department does not offer scholarships for students to study French abroad.