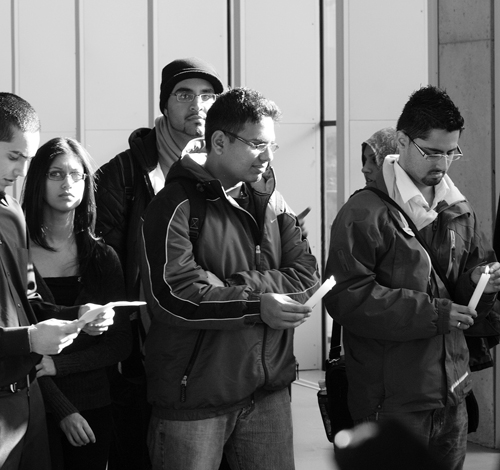 In response to the horrific attacks on several hotels in Mumbai, India between November 26 and 29 where almost 500 people were killed or wounded, the University of Toronto Mississauga Student Union (UTMSU), Muslim Students Association, Sikh Students Association and the Hindu Student Council organized a candle-light vigil to pay respects to the victims.

On December 3, over 100 students showed up at the CCIT Building to mourn those killed. The tragic terror attacks on western-friendly targets such as the Taj Mahal Palace Hotel were orchestrated by Lashkar-e-Toiba, a Pakistan-based militant organization, according to the only surviving victim, Ajmal Amir Kasab.

In a sign of solidarity, clubs representing these perspectives — Hindu, Muslim, Sikh, Indian and Pakistani — organized in a very short span of time a vigil with the purpose of bringing people together to mourn the victims of this tragedy.

UTMSU President Wasah Malik was very pleased with the turn-out and noted the event was organized in only two days. It is important to take the right steps forward, Malik explained, and only humanity can help humanity. The most important thing right now is helping the victims.

After remarks by the presidents of the various clubs and Surender K. Arora from the Indian Consulate in Toronto, the assembled group observed two minutes of silence before proceeding on a silent walk through the campus. Once back at the CCIT Building, the vigil concluded withMalik thanking everyone who came. Many of those in attendance also wrote messages to the victims on a large banner.

Arora noted in his open address that it is imperative to get rid of terrorists and that it is important to demonstrate that such tactics are unacceptable to the international community. Tensions between Indian and neighbouring Pakistan have always been high due to disputed claims in the Kashmir region and the fact that both countries possess nuclear arsenals. Religious tension also exists and adds fuel to conflicts, especially in mixed areas such as Mumbai, which has large Muslim and Hindu populations.

There were a number of references made by students about the September 11, 2001 terror attacks on the United States, often comparing that incident with the attack on Mumbai. Steven Zhou of the Ministry of Social Justice and UTM New Democrats explained that if the attackers are traced back to Pakistan, India could possibly claim justification for military action, following the United States example in Iraq. The worst thing that can happen is if people in India listen to the right-wing politicians in the Bharatiya Janata Party (BJP), Zhou added.

The general tone was one of mourning, rather than the need for vengeance. Soham Bhatia of the South Asian Alliance believes that the attackers were terrorists who were probably brainwashed, but stressed the importance of focusing on the human tragedy. We are not condoning [the attacks] in any way, he said. These victims are individuals who had hopes and ambitions, and so it is crucial to make that the most important part of this event.

Mohammed Ashour, president of the Muslim Student Association at UTM, noted that in the Koran, no one is supposed to kill innocent people, suggesting that if the attackers were truly followers of the faith, they would refrain from such tactics.

Malik agreed with that sentiment and added that there are those who have manipulated this religion to suit their own desires, and have moulded minds filled with hatred and violence. He emphasized the challenge of preventing these distortions of truth to be perpetrated, which serve only to divide people and turn them against one another.

We are here in memory of all those who lost their lives, and they are in our hearts, Malik said sombrely.