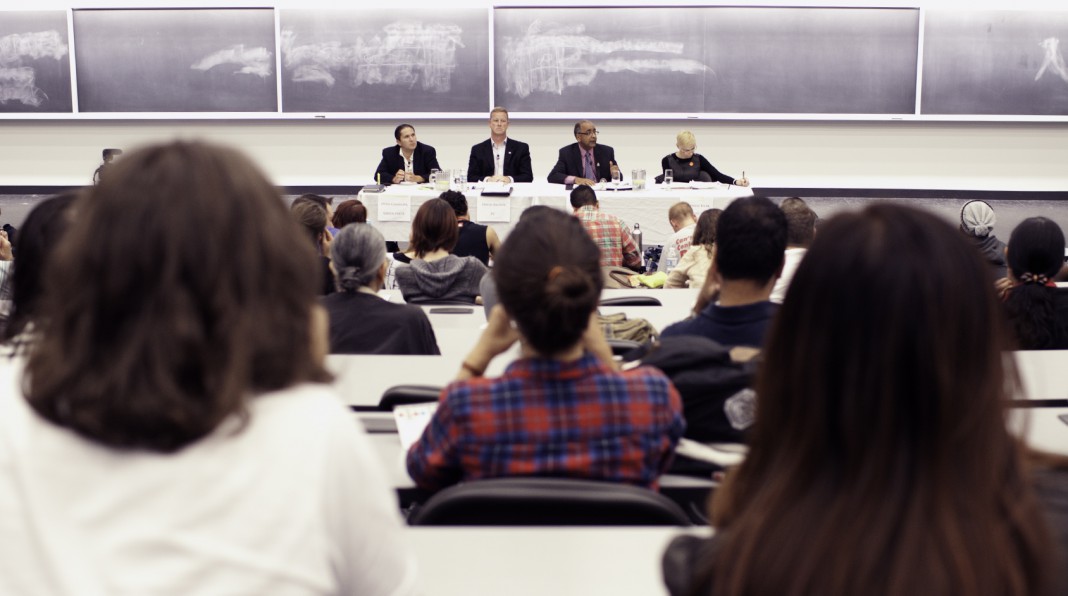 The four MPP candidates for the Mississauga-Erindale constituency attended a debate at UTM on Tuesday.

Students and residents filed into the Instructional Centre’s largest lecture hall to watch the candidates defend their platforms. The UTMSU invited Harinder Dakhar of the Liberal party, David Brown of the Progressive Conservative party, Michelle Bilek of the New Democratic Party, and Otto Casanova of the Green Party to debate matters of policy, focussing on post-secondary education.

After the first half-hour of opening remarks, the candidates fielded questions posed by executive members of UTMSU.

Considering that the student debt in Ontario averages at $37,000 per student, candidates were asked to explain their plans to relieve students of the heavy financial burden awaiting them after graduation.

Bilek claimed that, if elected, the NDP would eliminate interest on student loans. She referred to the provincial government of Newfoundland, which has frozen tuition fees, but failed to acknowledge the large deficit facing Ontario’s economy.

Instead of addressing fiscal policy on education, Brown assured students that the PC would create jobs.

“Wouldn’t it be great if we knew we had a job when we graduate?” Brown said.

“Wouldn’t it be great that, regardless of what that debt would be, we would be able to pay it off? We are going to lower the threshold on OSAP, but I think the better answer is to make sure you have a job when you graduate.”

Incumbent Dahkar pointed out the Liberal party has promised a $1,600 tuition grant to students that come from families with a combined income of less than $160,000.

Dahkar took the opportunity to reiterate that the PCs intend to revoke the Ontario Trillium Scholarship offered to international students. The Liberal candidate insisted that a way to improve the province’s economy is to attract foreign students and provide incentives to keep them in Ontario.

After remarking that he had been put in the “hot seat”, Brown explained that the PC government intends to revoke the scholarship because the province, running a $14-billion deficit, cannot afford to provide financial support for international students.

As a statement from UTMSU noted, the province still provides more loans than grants in OSAP for domestic students.

Bilek told the audience that the NDP understands the importance of immigration in Ontario. She expressed her concern for the large difference between domestic and international tuition costs and assured students that the party is committed to ensuring equal access to high-quality, affordable education. She did not comment on the policy changes that would be required to do this.

In the final minutes of the debate, Jonathan Resendes, student and Associate VP External, asked how each party intends to cut taxes on certain services while maintaining high-quality programs and addressing the deficit. The candidates stressed the need for “realistic” plans.

After reassuring the audience that the Liberal platform does ensure a realistic and balanced budget, Dahkar said that the NDP platform is unmanageable and accused them of making up their promises on education as the election has unfolded.

In response, Bilek explained that the NDP will raise taxes on corporations and invest funds in frontline services such as health care and education.

“We’re going to stop the no-strings tax giveaways,” Bilek said. “We’ll use our tax dollars wisely, not on lobbyists and not on consultants. It’s the waste and the corporate tax giveaways.”

Brown reiterated the necessity of affordable services and the elimination of inefficient policies. He insisted that the first step is addressing the deficit and building a stronger economy.

Matters of health care, transportation, infrastructure, and environment were not discussed.

In place of the final question, student Sunny Mann opted to make a comment in closing the debate.

“It seems to me that the issue is that Ontario doesn’t generate enough revenue to support the things we demand. We want better transportation but we don’t want to pay for it through taxes,” Mann said. “The only time we hear about tuition fees as an issue is during election time. A lot of the things we demand of these people [are] highly contradictory.”